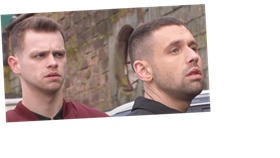 Victor Brothers (Benjamin O’Mahony) has already demonstrated what he’s capable of in Hollyoaks, but Jordan Price (Connor Calland) gets on the wrong side of the drug dealer once more next week.

Jordan warned Juliet Nightingale (Niamh Blackshaw) and Sid Sumner (Billy price) that Victor was the stuff that nightmares are made of, and he wasn’t wrong that’s for sure.

The young man has shown something of a sinister side himself but that’s nothing compared to Victor, who’s already railed at Jordan a number of times when Juliet and Sid messed up.

Last week, Jordan paid the price for Juliet’s outburst, as Victor beat him up — leaving him with severe bruises.

In last Thursday’s episode (September 18), Juliet’s action ultimately impressed Victor — much to Jordan’s dismay, as she has no idea what she’s getting herself in for.

In the coming episodes, Jordan enjoys some alone time with Leela Lomax (Kirsty Leigh Porter), but Victor continues to hassle him.

Jordan is ultimately late for a job, which leaves Victor seething.

It’s somewhat inevitable that Jordan will face Victor’s wrath, but what method of revenge will he take this time?