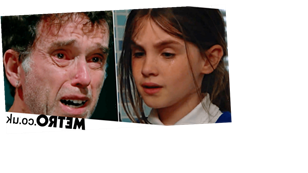 April Windsor (Amelia Flanagan) has been worried sick about dad Marlon Dingle (Mark Charnock) in Emmerdale, and during tonight’s episode she made a shocking discovery, as she came to learn that Mandy (Lisa Riley) had been lying to her in regards to children visiting prison, and therefore she ran away — leaving Marlon an emotional wreck as he learned of his daughter’s disappearance.

In spite of Cain’s (Jeff Hordley) advice, Marlon has remained steadfast on his decision to not let April visit him behind bars. As a result, the Dingles concocted a story about children not being allowed into prison — hoping that this would be enough to prevent April from wanting to visit her dad.

Initially, it did the trick, but during tonight’s episode she learned the truth when Eric (Chris Chittell) unwittingly revealed that children are, in fact, allowed in prison — which resulted in April putting two and two together to realise that her family have been lying to her.

As a result, she ran out of the shop, but as Mandy and Bob (Tony Audenshaw) chased after her, they discovered that she was nowhere to be found.

Billy (Jay Kontzle) tried to calm the situation, but — with doubt running around in all of their minds — Mandy decided that calling the police would be the best form of action to take.

News of the young girl’s disappearance spread around the village, and thus search parties were orchestrated — but no-one was able to find her.

Mandy relayed the upsetting news to Marlon, who frantically tried to explain to the guards that he needed to help April, but the guards weren’t interested and thus dragged an emotional Marlon back to his cell.

Meanwhile, in what appeared to be a barn, a cold April sat in the corner, attempting to get warm on a cold night.

Will April be found in time?