Spoilers: Who tries to kill Ian Beale? All suspects revealed in EastEnders 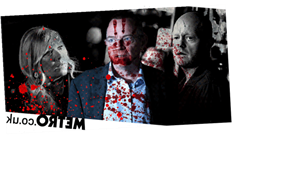 Ian Beale (Adam Woodyatt) is about to get a rude awakening when his recent actions lead to at least one of his enemies lashing out and leaving him to die as EastEnders launches a massive whodunit mystery.

With Ian upsetting, conning and betraying half of Walford over recent months, the suspect list is a long one. But who has finally snapped? And after dealing a potentially killer blow, will they get away with their crime?

This pair have been enemies for a long time and no-one can convince us that Max doesn’t still hold on to some residual rage over Ian letting him take the fall for Lucy’s murder. But more recently, he has discovered that Ian swiped his money to buy the Vic and as Ian crosses Max again by blackmailing him over his kiss with Linda, Max prepares to put him out of his misery for good…

Peter has lost all respect for his dad after discovering the way he has been behaving and has pretty much cut him out of his life. When Ian is arrested, Peter couldn’t care less – but he does worry about how it will impact Bobby so will he confront his dad?

Setting aside the shoddy way Ian treated Sharon when she rejected his recent advances, Sharon has yet to discover the truth that Ian was partly responsible for her son Dennis’ death. If she discovers his deceit and betrayal, there’s no telling how she could react…

Dotty DOES know what happened to Dennis – but Ian turned the tables on her after weeks of blackmail and painted her as the liar, humiliating her in the process. Is she about to be pushed again by him?

There is no love lost between this pair and it soon becomes clear that Ian is behind the business contacts being lost by the Mitchells. Phil also loved Dennis, so if he found out Ian was involved in his death, this would drive him to murder…

It’s Ben who first finds out that Beale has been the Squeal over the Mitchells’ recent dealings and he ends up squaring up to him. Ben has killed before in a heat of the moment – will he lash out at Ian in the same way that he did Heather?

Tina heard Ian badmouthing her family and believes that losing the Vic is the cause of Mick’s recent misery – but when Ian usurps her plan and turns it against her, she is left seething. As she heads to the Vic, will she give Ian the same treatment as she gave Stuart?

Speaking of Stuart, when Ian is the one to reveal Tiffany’s surrogacy plans to Whitney, it ends with the arrangement falling through. Ian later rubs salt into the wounds for Rainie, leaving Stuart looking murderous. And this is a man willing to get himself shot to get revenge…

Ian has pushed his luck with Rainie in the past – and they have history. So when he spits venom at her after destroying her surrogacy dream, she is unlikely to respond well.

Bobby is a reformed character but we know what he is capable of even against his own family. He is the one currently most loyal to Ian – so when Peter fills him in on the truth, he is the one with most to lose…

Having already chucked Ian out, Kathy is horrified when Ian is suddenly arrested but when she tries to help him, she is just met with torrents of abuse. Could Kathy turn on her own son in a violent showdown?

Kissing Max was a huge mistake – and the fact that Ian is using it as a means to blackmail ll disgust her. With her marriage to Mick at stake, will Linda step in and shut him up?

There is no telling what Suki is capable of – but it’s clear to everyone that she is not a woman to be crossed. Ian has done the dirty on her and she is seething and planning her revenge. Is she prepared to go as far as murder?

Related posts:
Latest News:
Inside The Drama At Wendy Williams’ Mother’s Funeral
Spectrum Developing Adaptation Of Don DeLillo’s ‘Libra’ With ‘American Spy’ Author Lauren Wilkinson, Playground & Paul Giamatti’s Touchy Feely Films
Normal People’s Paul Mescal struggling with lack of work and has spent show pay
'The Lady and the Dale': Meet the Fake Tricycle Car Scam Artist (Video)
Recent Posts
This website uses cookies to improve your user experience and to provide you with advertisements that are relevant to your interests. By continuing to browse the site you are agreeing to our use of cookies.Ok