Former Labor foreign minister Stephen Smith has been appointed to the prestigious posting of United Kingdom high commissioner as the Albanese government moves to put its stamp on the nation’s diplomatic corps.

Smith, who also served as defence minister during the Rudd-Gillard years, will head to London early next year after completing a major strategic review of the nation’s defence forces for the government. 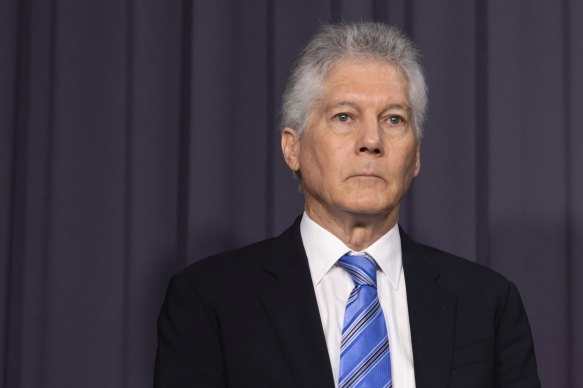 Smith’s appointment will increase speculation about who will be appointed to the highly sought-after posting of United States ambassador when Arthur Sinodinos’s three-year term ends in February.

There has been talk former prime minister Kevin Rudd, currently based in New York as president of the Asia Society, could be a contender for the role.

Foreign Minister Penny Wong said while it was appropriate to appoint a former senior cabinet minister to the UK, she would end the Morrison government’s emphasis on appointing former politicians when it came to other significant postings.

A controversy recently erupted in NSW over the appointment of former deputy premier John Barilaro to the new role of trade commissioner to the United States, based in New York. Barilaro has since withdrawn from the position.

Revealing a slate of diplomatic announcements on Friday, Wong said the appointments would “strengthen Australia’s diplomatic capability and match people with the right qualifications and expertise to senior postings”.

Former NSW Liberal premier Barry O’Farrell and ex-Liberal cabinet minister Mitch Fifield will be succeeded by experienced public servants when their respective terms as high commissioner to India and Australia’s permanent representative to the United Nations end next year.

Former Liberal premier of Tasmania Will Hodgman, currently serving as high commissioner to Singapore, will also be replaced by an official from within the Department of Foreign Affairs when his term ends.

Wong said Smith’s appointment reflected the “eminence of Australia’s relationship with the United Kingdom” given the many senior roles he held over his political career.

“I want to make clear our government is reversing the previous government’s approach and we are rebalancing appointments towards more qualified senior officials consistent with community expectations and position requirements,” she said.

“In circumstances, there is also a clear advantage for Australia to be represented by people who
have had distinguished careers beyond the public service such as business people and former parliamentarians.”

In recent times the high-profile roles of US ambassador and UK high commissioner have been filled by former senior politicians aligned to the government of the day.

Cut through the noise of federal politics with news, views and expert analysis from Jacqueline Maley. Subscribers can sign up to our weekly Inside Politics newsletter here.