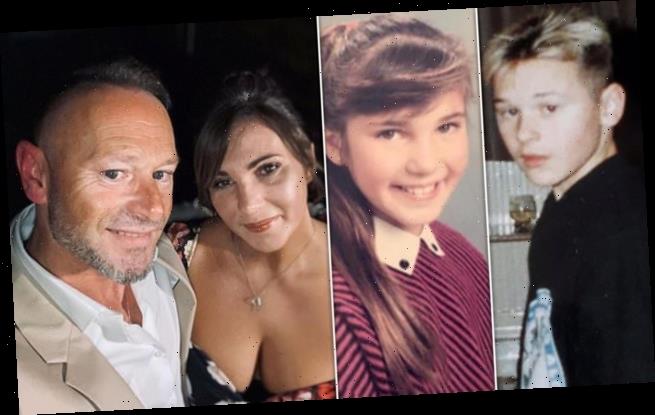 Childhood sweethearts who dated as 10-year-olds have revealed how they plan to marry after reconnecting on Facebook after 33 years apart.

Darren Arthur, 45, and Keely Chivers, 45, from Milton Keynes, were in the same class at primary school and became each other’s first boyfriend and girlfriend aged 10.

They lost touch after Darren’s family moved away from the area, but reconnected 33 years later after Keely discovered Darren on Facebook.

And, after agreeing to meet up in person, the couple quickly fell in love and are now planning to get married in September.

Darren Arthur, 45, and Keely Chivers, 45, from Milton Keynes, were each other’s childhood sweethearts before losing touch. Two years ago, they reconnected online and are now planning their wedding (pictured left, Darren in his youth, and right, Keely as a child)

Darren and Keely had been in the same class at primary school for two years and became each other’s first boyfriend and girlfriend aged 10.

Darren revealed: ‘I used to go knocking for her when she was my girlfriend back in the day.

‘I remember her mum always used to give me orange juice as I waited for her.

‘We were as boyfriend and girlfriend as you can be at that age – we must have been around 10 or 11.

‘I just remember always hanging around with her.’

But in 1986 Darren’s family moved 123 miles away to Doncaster due his dad changing jobs and he lost touch with Keely.

The pair went on to marry different partners but both found themselves divorced in 2015.

Then in August 2018, single Keely searched for her first boyfriend on Facebook and sent him a friend request. 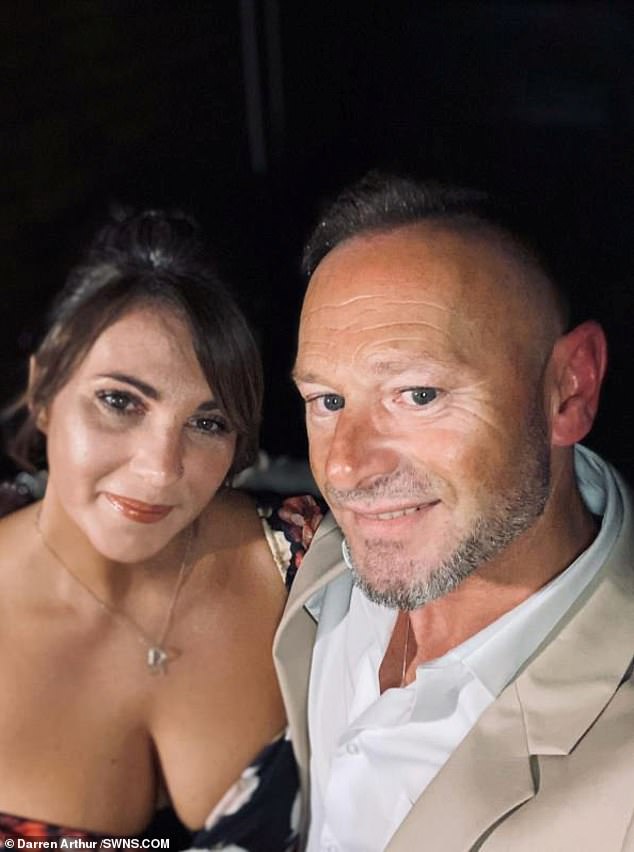 The couple fell in love after reconnecting two years ago, and are now head-over-heels for each other (pictured together since reuniting)

Keely explained: ‘I don’t know what was going through my head when I searched for him.

‘It wasn’t like he had been playing on my mind all these years.

‘We didn’t have mobile phones or the internet when we were at school so we just lost touch and never re-appeared in each other’s lives.

‘He was the popular cheeky chappy at school so I remember being chuffed to bits that he was my boyfriend.

‘But we were pretty young. I think all we used to do was hold hands and go knock for one another so we could play outside. That’s when it was safe for you to do so.’

She continued: ‘It might have been because I found myself single and thought I had nothing to lose. 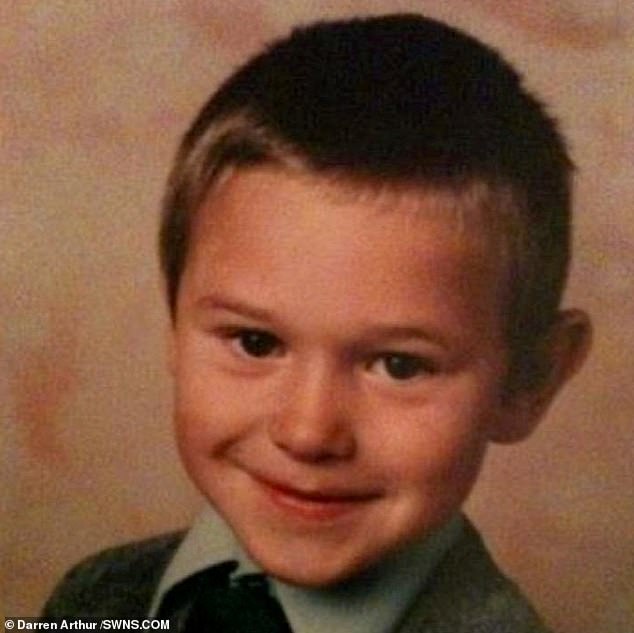 The couple were in the same class at primary school and were ‘always hanging around together’ in their youth (pictured, Darren as a child)

‘I looked through a few of his pictures and they all did look like him. I just thought “Oh my God is that really him.”

‘So I added him as a friend and as soon as he accepted I messaged him.’

Darren said: ‘When I saw the friend request I just thought, “Who the hell is that?”‘

‘But then her old surname was in brackets and the penny dropped.’

Darren replied: ‘Well it’s certainly me crickey how many years is it? x’. 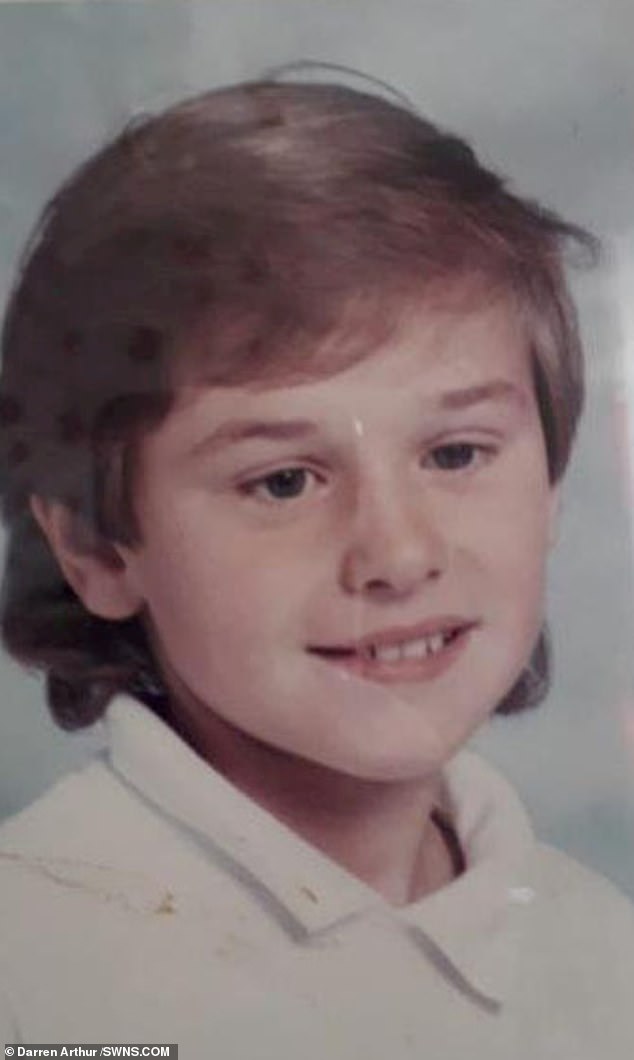 Keely revealed: ‘We just got on really well and the conversation was really flowing. I’m glad I took the plunge.’

After speaking ‘non-stop’ for two weeks, the couple decided to meet meet up in August 2018, and said they ‘fell in love in an instant’.

Darren said: ‘I invited her round and when I saw her in the middle of my hallway I was just shaking.

‘But that’s when you can tell you like them. She still had the same beautiful eyes and hair. She was obviously a bit bigger but that’s what happens.’

Meanwhile unemployed Keely said: ‘When I saw him it was definitely love at first sight. I remember I had the butterflies in my stomach when I was driving up there.

‘Although it’s been the most bizarre start to a relationship I’ve had it’s definitely been the best. 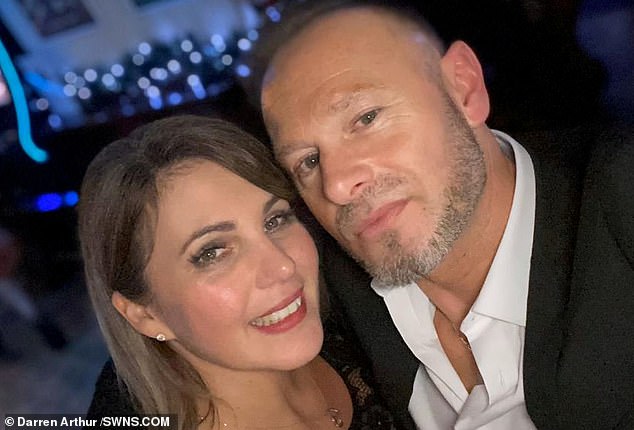 ‘We just love each other so much. And the thing is we just haven’t had an argument. It’s just going so well.’

Over the next eight months the couple would meet a few times a week – taking it in turns to commute from Milton Keynes to Doncaster – before Darren moved in with Keely in April 2019.

And a month later, he proposed on the anniversary of the death of Keely’s dad in May 2018.

Keely said: ‘It was so thoughtful. He took me back to the place where we had our first drinks. 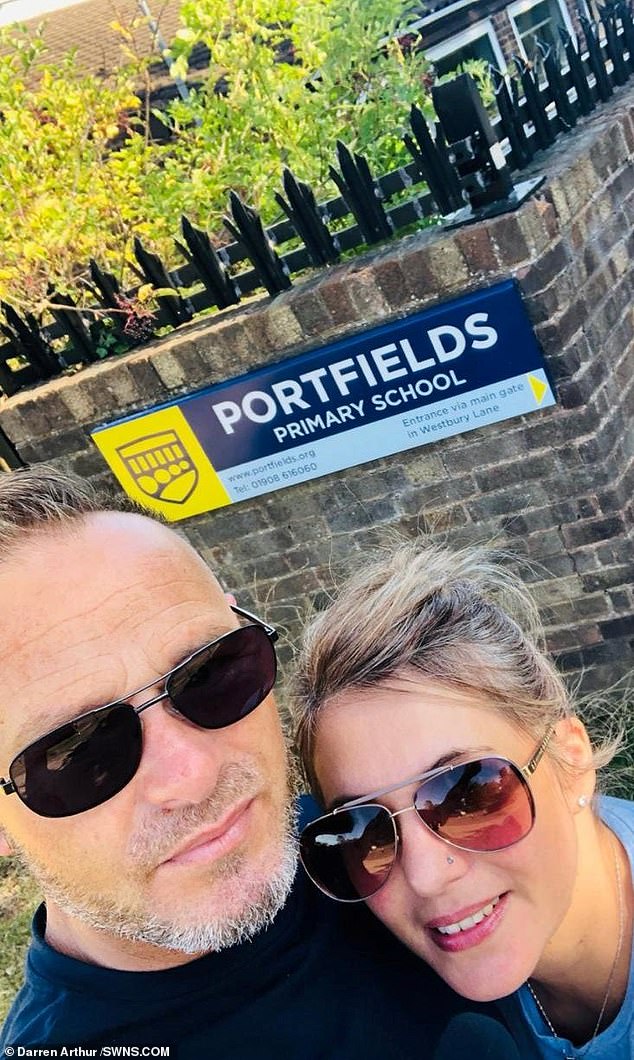 ‘I thought he was taking me out to cheer me up as it was the anniversary of my dad’s death and I lost my mum just a few months ago.

‘I thought he was acting a bit off and I couldn’t put my finger on it.’

She continued: ‘We went outside and I asked him what was up and he just turned round and said, “Sod it” and bent down on one knee. He didn’t want me to feel sad on that day.’

The pair plan to get married in September this year, and even have old school friends as their wedding guests.

Keely revealed: ‘I already have the dress I want. I knew it was the one for me when his mum cried.

‘I just can’t wait to become his wife and spend the rest of my life with him.’