One of the troubled Sydney Festival’s marquee productions has been scrapped following an outbreak of COVID-19 among the cast.

Qween Lear, billed as “a fierce and fabulous musical adaptation of King Lear, set over one wild night in ancient Sydney”, was due to occupy the Hordern Pavilion from January 7 to 16. 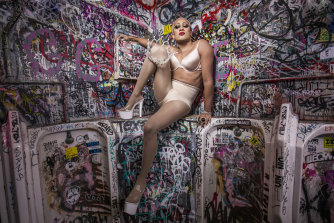 Qween Lear has been scrapped after a COVID outbreak among cast and crew.Credit:John McRae

The news comes on top of growing calls from a coalition of Arab groups for a boycott of the festival over a sponsorship deal with the Israeli Embassy.

In a brief statement on Wednesday afternoon, Sydney Festival said Qween Lear was cancelled and ticketholders would automatically be refunded. Further comment has been sought.

The production had already struck a rocky patch earlier this month when Aaron Farley, who performs as drag queen Minnie Cooper, withdrew. Farley, who was to play the lead in the 90-minute production, had activated a “betterment” clause in his contract and taken up an offer elsewhere.

The cast was reshuffled with Michael Cormick, originally cast as Gloucester, stepping into the lead role and Paulini Curuenavuli joining in the role of Kent.

Sydney Festival, helmed for the first time by Olivia Ansell, has also been making headlines for all the wrong reasons ahead of its scheduled opening on January 6.

The event has been engulfed in controversy after accepting $20,000 in sponsorship from the Israeli Embassy to present a dance work, Decadance, by Israeli choreographer Ohad Naharin.

The latest artist to withdraw from the festival in protest is Karla Dickens. Dickens’ work Return To Sender, will continue to be shown at Carriageworks but not under the umbrella of the festival. Dickens has also cancelled the planned opening night for the work.

At least eight other performers have withdrawn in protest amid calls for a boycott of the festival by pro-Palestinian groups. They include high-profile artist Khaled Sabsabi and comedian and TV personality Nazeem Hussein.

Elsewhere, the huge surge in Omicron cases has thrown productions around the city into chaos. Major productions including Hamilton, Come From Away and Opera Australia’s La Boheme have all been affected.

Fourteen performances of Hamilton have been cancelled after company members tested positive to COVID-19. Come From Away has also cancelled performances this week, while Opera Australia has been forced to suspend rehearsals of La Boheme.

The Booklist is a weekly newsletter for book lovers from books editor Jason Steger. Get it delivered every Friday.