T-Pain, Kehlani Perform Joint Single 'I Like Dat' on 'Kimmel' 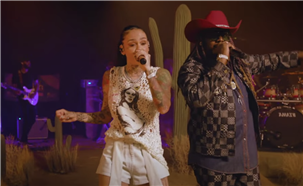 T-Pain and Kehlani stopped by Jimmy Kimmel Live to offer a sultry rendition of their recent collaboration, “I Like Dat.” Performing from a desert-themed set, complete with fake cacti, T-Pain kicked the song off with his live band before bringing Kehlani out for her verse.

“I Like Dat,” released in May, is built on a reworked version of T-Pain’s “Buy U a Drank.” The song sees T-Pain showing some love and appreciation to the lady in his life, as he jumps between AutoTuned singing and rap verses, while Kehlani shows up on the second verse to flaunt her own achievements.

“Kehlani has been one of the best to work with, real talk,” T-Pain said in a statement about the collaboration. “She did her thing on this track and made it what it is. Also, it do be like that sometimes.”

Kehlani released her second album It Was Good Until It Wasn’t in May 2020. In a recent feature with Rolling Stone, she discussed her upcoming third album and wanting to create a “lighter” tone with the record following the pandemic.

“Everything going on right now is heavy,” she said. “Now, not only am I not in a heavy time, but I’m starting to get out of the mindset of ‘When are we getting back to normal?’ And more like, ‘This is our new normal.’ That’s a very privileged thing to say, being that I haven’t experienced a close loved one pass away or get the virus. I think people need some type of warmth, and I’m in the head space of centering positivity.”