SCAMMERS pretending to be from Tesco have taken in more than 100 people with the offer of non-existent TVs.

The scam, which has been circulating on Facebook, suggested that Tesco had 500 Samsung 55” Ultra High Definition televisions to give away because they had “slight damage”. 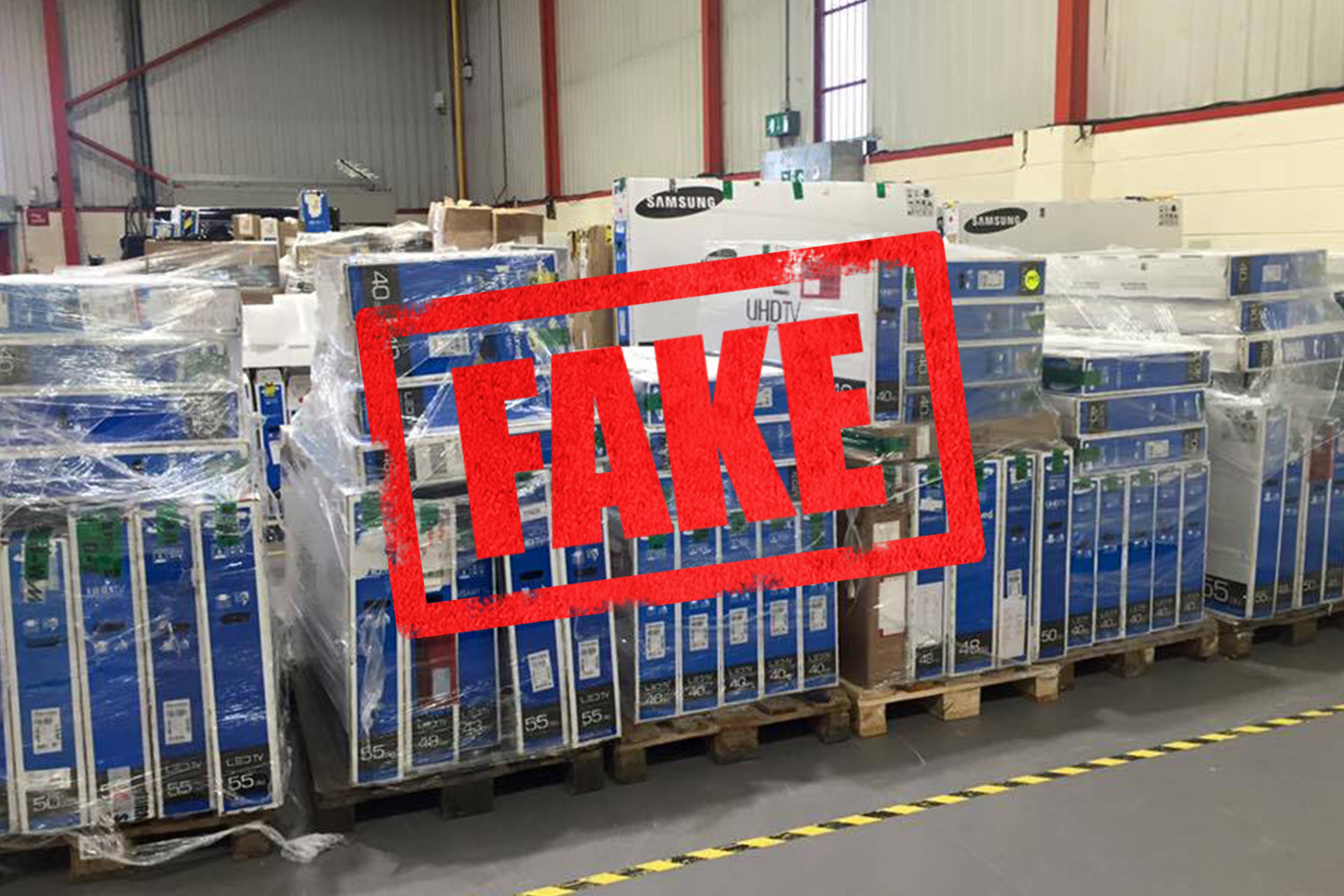 “We have around 500 TV’s in our warehouse that are about to be binned as they have slight damage and can’t be sold.

“However all of them are in fully working condition, we thought instead of binning them we’d give them away free to 500 people who have shared and commented on this post by July 18,” the post said.

Unsuspecting users then enthusiastically shared the post, hoping to qualify for a free television, spreading the scam.

One user wrote on Facebook, “I’d love to, thank you Tesco!” although another questioned the authenticity of the site. 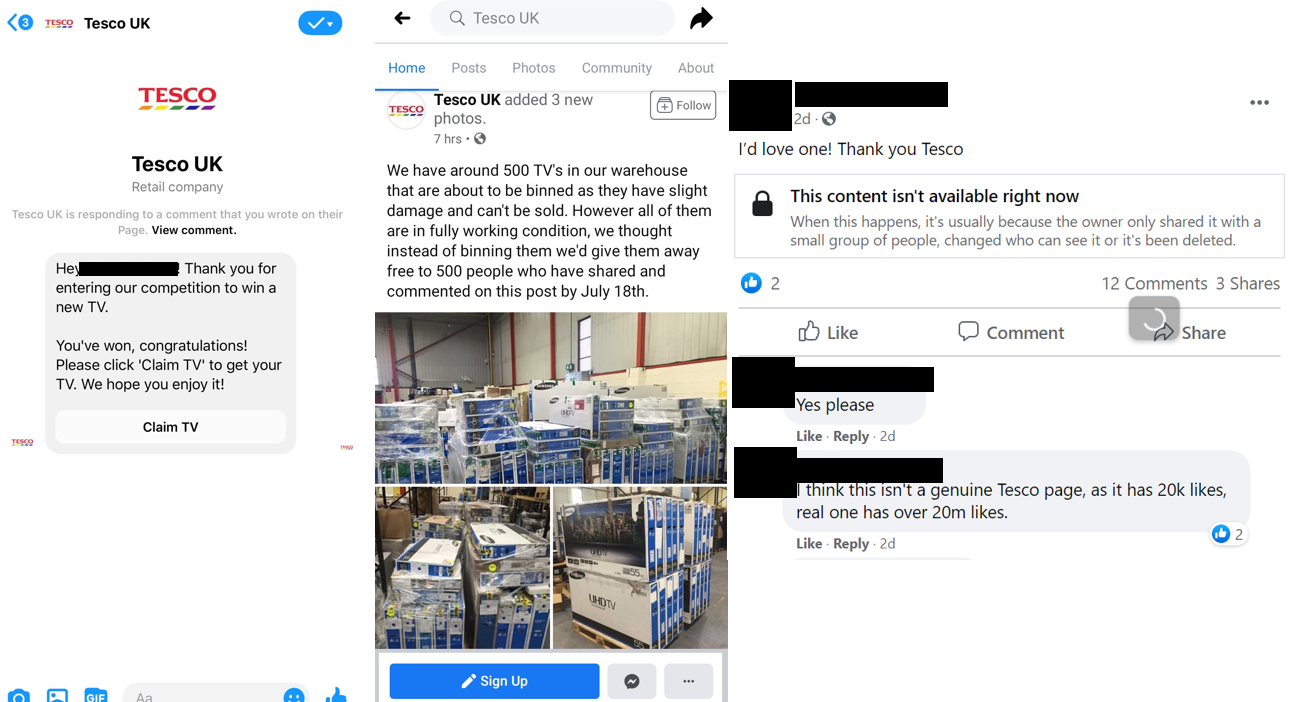 Those who registered then received an email or text message, again using Tesco branding and offering them the chance to ‘claim their prize’.

The email read: “Hey [Victim’s name]! Thank you for entering our competition to win a new TV. You’ve won, congratulations! Please click ‘Claim TV’ to get your TV. We hope you enjoy it!”

A button in the email directs the users to a landing page where they can enter their name, home address, telephone number and bank account details.

The scam, which was first uncovered by law firm Griffin Law, has already attracted around 100 responses.

A Tesco Spokesperson said: “This was not a genuine Tesco Facebook page or offer.

“Customers can check whether a Tesco Facebook page is genuine by the blue verified tick next to our name.”

In response to a concerned customer on Twitter, Tesco said: "I can confirm that this is a scam and would advise you not to enter the giveaway."

Although the original page has now been removed, a similar one has sprung up in its place urging winners to register to claim their prize. 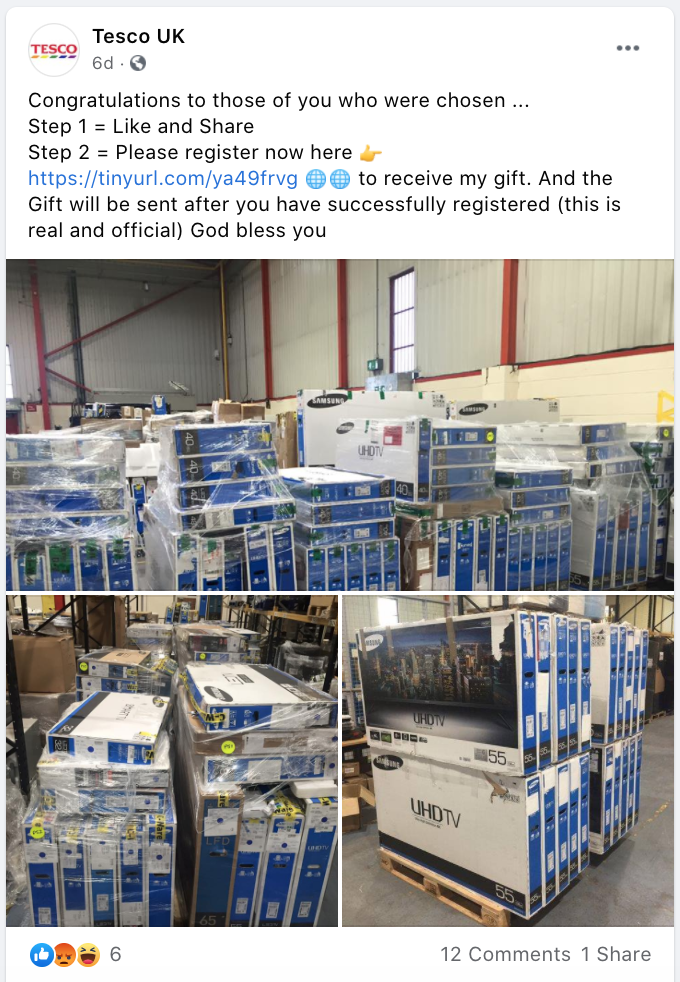 Donal Blaney at Griffin Law said, “These scammers know exactly how to entrap us.

“Here, they used a store we trust, told a plausible story and let our desire for a new TV do the rest.

“If you see an email or SMS message like this, call the company to check it’s legitimate.

“If it isn’t, tell the company about it and file a report with the authorities.

“If you were tricked and had your identity stolen you need to take immediate steps to remedy the problem.”

Earlier this month Anti-Counterfeiting Group warned shoppers about fake clothes being sold after finding a huge surge in counterfeit items being bought.

And in 2017, thousands of Brits were fooled by a fake Tesco Facebook page which claimed to offer followers the chance to win a £1,000 voucher.