The 9 Best Movies We Saw at SXSW Film Festival 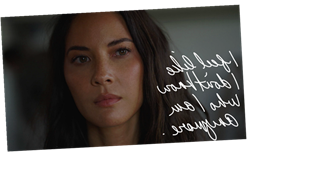 Another virtual film festival has come to pass. I learned a lot about myself this time around — namely, my deep hatred for movies made during quarantine might actually be a deep love for them (I don't know, but I willingly watched and enjoyed four of them … ). The binge was real over the five-day festival, which spanned Tuesday to Saturday. I managed to squeeze in 20 projects through SXSW's duration. Here are my 9 favorites. Jenna Ortega gives a career-defining performance as Vada, a teen struggling in the aftermath of a fatal shooting at her high school. The film, which won the grand jury award in the narrative feature competition, is the directorial and screenwriting feature debut for Megan Park (whom you might recognize as the Christian girl from The Secret Life of the American Teenager). By focusing on the days following the incident at the film's core, The Fallout is able to capture its subjects with a lens that is sensitive to those affected by tragedy while still allowing room for the teens to exist outside of it, too. Finally, a quarantine movie that actually benefits from the format necessitated by quarantine. Unlike most of the rushed, half-baked projects (ahem, Coastal Elites) that have multiplied in the year since the COVID-19 pandemic began, Natalie Morales's directorial feature debut feels intentional. This is a film that made the pandemic limitations work in its favor, using the Zoom picture-in-picture aesthetic to tell the story of the long-distance friendship between a wealthy grieving man (Mark Duplass) and his Costa Rica-based Spanish teacher (Morales). Even better, this is not actually a pandemic story — as far as we know, Language Lessons exists in a coronavirus-free world.

WeWork: Or the Making and Breaking of a $47 Billion Unicorn This illuminating documentary walks viewers through the rise and fall of the once-ubiquitous coworking giant, WeWork, and gives them an intimate introduction to the misguided visionary at the company's helm, Adam Neumann.

The End of Us Another surprisingly winning quarantine film! The End of Us takes a more traditional approach to the COVID-made project than Language Lessons, documenting a newly broken up couple's experience quarantining together. Quiet and deceptively simple, the witty and heartfelt film provides a needed dose of humor to a harrowing global trauma with which we are all too well acquainted.

I’m Fine (Thanks for Asking) If you found yourself transfixed by roller skating icon Oumi Janta, wait until you meet Danny. Co-director, co-writer, executive producer, and star Kelley Kali earned special jury recognition for multi-hyphenate storyteller at SXSW for this moving look at a single day in the life of newly-widowed Danny, a single mom roller skating from job to job in hopes of securing an apartment for her and her 8-year-old daughter. Once-flamboyant hairdresser and current nursing home resident Pat (Udo Kier) reconciles with his past as he journeys into town to style his former client and close friend's hair for her funeral. Writer-director Todd Stephens strikes the perfect balance of nostalgia, humor, and melancholy in Swan Song, which manages to feel at once concentrated and sprawling in scope — like life itself, I suppose. Who says quarantine movies can't be hilarious? Not Whitney Call or Mallory Everton. In Recovery, sisters Blake (Everton) and Jamie (Call) road trip from Albuquerque to Washington State at the onset of the pandemic to rescue their grandmother from her COVID-infested nursing home. While that may not sound like a laugh riot, let me tell you, it is. I found myself legitimately laughing, sometimes hysterically, from the comfort of the couch I have left approximately three times in the past year (a span of time in which laughter has been rare). Justine Bateman's feature debut gives a voice to mental illness — literally. And that voice loves tank tops and rescue dogs (it's Justin Theroux, guys). Olivia Munn shines as the titular Violet, a Hollywood executive whose life choices are guided by the verbally abusive voice inside her head. The personification of intrusive thoughts is innovative, yes, but the visibility is also greatly needed in the ongoing fight to destigmatize mental health issues. The unexpected pregnancy canon ranges from quirky and heartwarming (Juno, Obvious Child, Waitress) to bleak and biting (Never Rarely Sometimes Always, 17 Girls). Norway's entry into the well-worn subgenre falls somewhere between the two extremes. The film trails 20-something Rakel, an avid partier and cartoonist who learns she's 6 months pregnant and must follow through with her unwanted pregnancy. What follows is a funny and wholly original journey as Rakel (aided by commentary from her illustrated "ninja baby") navigates her options.