The agony of a beloved child flying the nest

What I call ‘pre-grieving’ began a year ago. The moment my daughter Isobel began Year 13 (upper sixth in my day) and started talking excitedly about university.

Until then I hadn’t fully envisaged a time when my children would leave home and lead their own lives. The realisation that this was imminent hit me like a football to the stomach.

It may be the only thing I have in common with that beautiful, rich, uber-successful advocate of ‘conscious uncoupling’ Gwyneth Paltrow, who described daughter Apple’s recent departure for college as feeling ‘as profound as giving birth’.

Over the following months, whenever I walked past Isobel’s bedroom to see the entire contents of her wardrobe on the floor, my initial annoyance was tempered by painful premonitions of how I’d feel once she’d packed up her mess and gone. 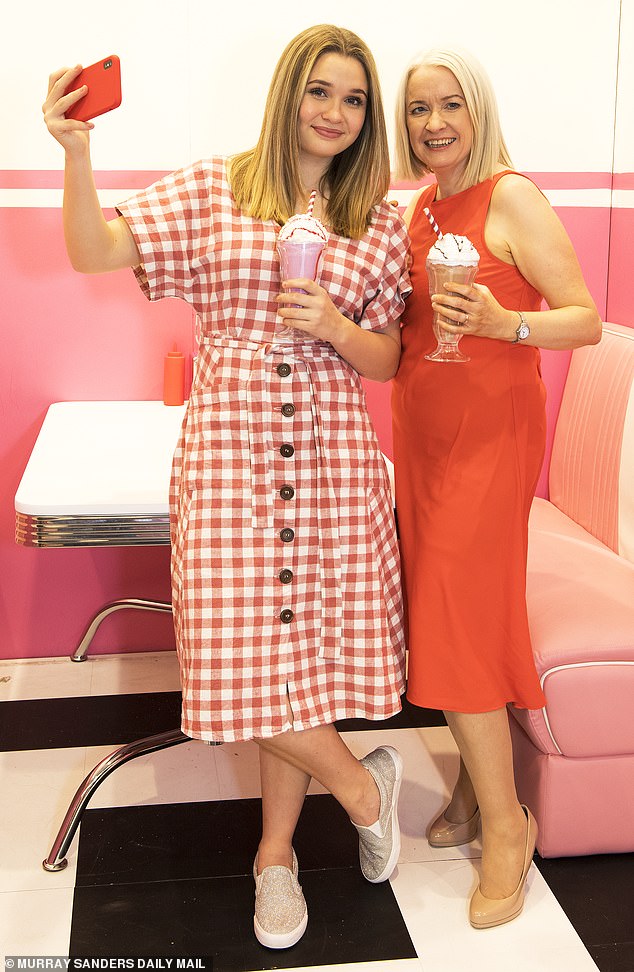 Helen Carroll with her daughter Isobel. Helen says she began ‘pre-grieving’ her daughter’s departure ‘the moment [she] began Year 13…’

It was only after the dreaded day of her departure that I understood the underlying reason for the intensity of my feelings. Extreme though it may sound, the prospect of Isobel leaving somehow stirred up the intense feelings of loss I had experienced when my sister, Jane, died in a car accident, decades earlier, when I was nine and she was eight.

We were on a zebra crossing making our way home from school one April afternoon when a car failed to stop, hitting Jane and missing me by inches, although I had been holding her hand. Born just 11 months apart, we had shared a bedroom and spent almost every moment together, so her loss was painful beyond words.

I was to suffer further sudden losses, too. Shortly after I left home for journalism college, aged 19, my previously healthy dad died from a heart attack, aged 56, and just before my youngest child’s first birthday, my mum died, also suddenly, though she was in her early 80s by then.

On the other hand, my husband and I have been together since I was 19 and he was 20, so I don’t have experience of loved ones leaving my life in non-catastrophic circumstances.

This means I have no real frame of reference for coping with the sort of absence that comes with a child going to university. Grief is a common emotion for parents when children leave home, according to Celia Dodd, author of The Empty Nest: Your Changing Family, Your New Direction.

‘This intense sadness is natural, because a parent’s life has been closely enmeshed with their child’s for so many years and in so many different ways — since they were in the womb, in fact,’ she tells me. ‘So it’s common to experience an almost physical sense of loss; many mothers say they feel they’ve lost a part of themselves.

In my case, this is amplified by the tragedies of my past. My parents and four older siblings were in no fit state to support me through my grief after Jane died.

As it was the late 1970s, no one mentioned counselling, neither for the trauma of being the only person with my sister as she lay dying, nor the crippling sadness that followed, so I was left to figure a way through it myself. I cried myself to sleep every night for years. 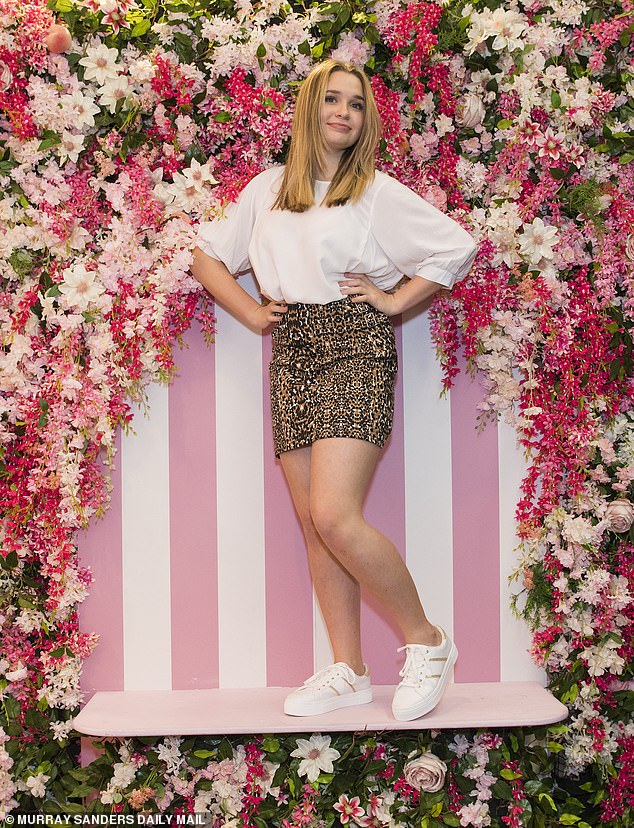 Much later, after my father’s sudden death, my mother, unable to bear being alone in the family home, sold it and moved into a one-bedroom flat, where she lived for a year before remarrying.

This meant that, unlike most teens and 20-somethings, many of whom boomerang back for years, I never had a home to return to.

This further compounded my negative associations with what is, after all, a perfectly normal developmental phase.

The sudden absence of a loved one had, until now, meant devastating loss to me. I’ve read enough about psychology to know that our primal brain — the main function of which is to ensure survival — has a nasty habit of taking over at times like these, preparing us for and, crucially, trying to protect us from perceived threats.

I count myself lucky that my eldest, Daniel, 20, opted in 2020 to work for a charity for the homeless instead of going to university, so I was granted a reprieve from this particular brand of parental grief. His pay doesn’t yet stretch to affording London rents so he still lives at home.

However, Isobel, 18, was excited about the socialising and communal living of the university years. A selfish part of me couldn’t help fantasising about her not getting her grades and having to stay home for an extra year to resit.

But all her hard work paid off and reality dawned: Isobel was off to university to study sociology.

As she cried with joy, hugging me and her dad, Dillon, who is an academic, every motherly emotion — pride, relief, fear, anxiety, dread and a sense of impending loss — fought for space in my mind and body. Her start date was just four weeks away and there was a lot of practical stuff to do, from making sure her accommodation and student finances were in place to helping her select modules.

Isobel’s face lit up at the prospect of her new-found independence as she chose mugs in Ikea. Although excited for her, the image of my daughter reaching into an unfamiliar cupboard for a cup to make her morning coffee made me want to retch.

I woke on the morning of her departure with the tightest knot of anxiety in my stomach. I went for a run to release some tension. As Cat Stevens’ Wild World — which I know is not about his daughter leaving home, but easily could be — played through my earphones, tears ran down my face.

The two-hour drive, although the car was loaded up with all of Isobel’s worldly goods and half of Ikea, felt like any other family road trip — our youngest, Christian, 14, with whom she has a close bond, came along for the ride. We had a two-hour slot to unpack, then it was time for the moment I’d dreaded for so long.

Isobel said she wouldn’t be able to handle my tears so I managed to hold them in as we hugged and kissed goodbye with promises to call, FaceTime and visit. 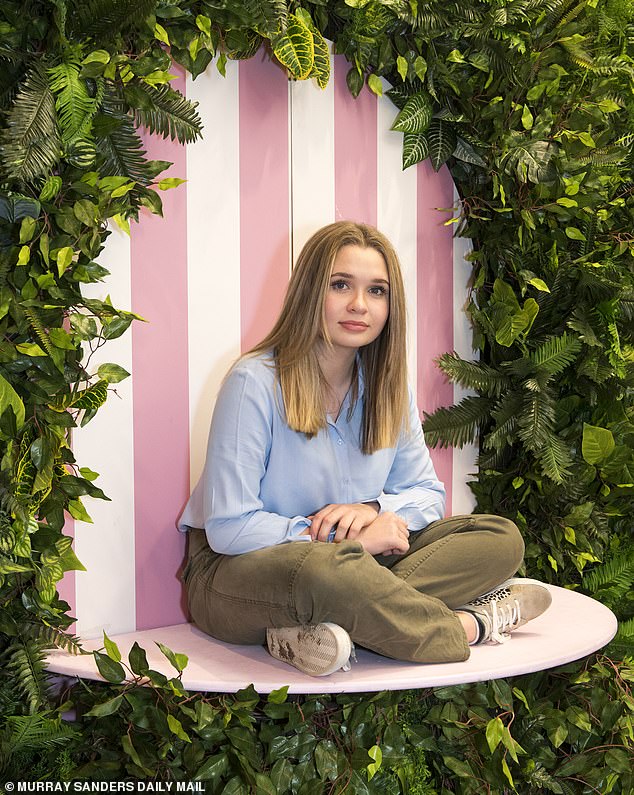 ‘Isobel (pictured) said she wouldn’t be able to handle my tears,’ Helen writes. ‘So I managed to hold them in as we hugged and kissed goodbye with promises to call, FaceTime and visit’

Instead, I sobbed silently on the drive back. It was dark by the time we got home, which made everything feel bleaker. As we walked through the door, I felt so panicky I struggled to catch a full breath.

After allowing myself a moment alone in her bedroom, where every surface had been cleared but her sweet smell lingered, I poured a glass of wine (something I wouldn’t normally allow myself on a Sunday) and snuggled up on the sofa, with Christian in front of the TV. He’s a thoughtful, loving boy and I was glad he was there, but the experience was bittersweet.

Isobel would usually be squeezed on the sofa with us and, when I asked how Christian was feeling, he said he didn’t feel able to ‘delve’ into his feelings about her leaving ‘just yet’.

Somehow, the ten days since we dropped Isobel off, rather than the purgatory I had been dreading, have been easier than the 12 months leading up to it.

We’ve chatted, mostly on FaceTime, every day and I can see she’s thriving. I’ve also had text messages and ‘Uber family’ alerts at 4am — she’s clearly made the very most of freshers’ week — letting me know she was ‘home’.

While that word, associated with somewhere other than our house, feels like a dagger to my heart, I very much appreciate her letting me know she’s safe.

Something has ended. That little girl whose hand I held on her first day at nursery, when she ran, terrified, for the gate, is all grown up. However, unlike my sister Jane — Isobel’s middle name, incidentally — I know I haven’t lost her. She’s just embarking on what I feel sure will be a wonderful adult life.

I’m looking forward to hearing all about it and, of course, playing as much of a part in it as she wants me to.