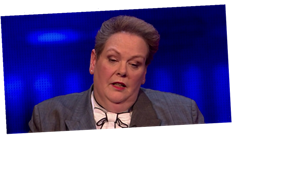 Anne, 61, is usually the one to beat on the ITV show hosted by Bradley Walsh.

After gaining a reputation for "knowing everything" it came as a surprise that she answered two consecutive questions wrong, which led to a player beating her in the first round.

In an unusual turn of events, Bradley was aghast and said that the contestants were a step ahead of quizmaster Anne.

The first question she failed to answer was: "Which of these bodies of water is the largest?"

She answered "Caspian Sea" when the answer was in fact "Bay of Bengal.

Anne said: "I was debating between those two and went wrong.

"I was just trying to picture them on maps. I mean the Bay of Bengal is big I just thought the Caspian Sea might be bigger."

The next questions was: "What did Gordon Strachan blame for Scotland's failure to reach the 2018 World Cup?"

"Genetics" was the correct answer, but Anne said "Food Poisoning".

She the proceeded to say: "Yes I didn't know he blamed genetics. I mean I thought they were just generally a bit rubbish."

The I'm a Celebrity… Get Me Out Of Here! star didn't seem phased and was back to her usual clever ways in the next round, sending contestant Hilary home.

Despite failing to answer several questions correctly, Anne was soon back to her usual self.

She managed to beat the final two contestants, who sadly didn't do enough to take home the cash prize.

The Chase continues tomorrow at 5pm on ITV