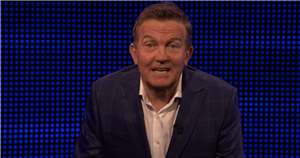 The Chase fans were left in disbelief during Tuesday's edition of the ITV quiz show.

Host Bradley Walsh welcomed four new contestants and was eager to see them get through to the final with some money in-hand.

Shaun Wallace aka the Dark Destroyer was in the hot seat trying to prevent the hopefuls from going home with the cash prize.

Daniel, Emma, Suzanne and Calum all took it in turns to take on the cash builder and later went head-to-head with The Sinnerman in an intense round of general knowledge questions.

Calum was the first person to take on the tough quiz show and managed to make it back home and try, putting £5,000 into the prize fund.

The pressure was on for second player Suzanne to follow suit and add more some cash to the kitty.

Suzanne managed to answer four questions correctly in her Cash Builder round, earning a sound £4,000.

She had the choice to swap the money for a higher or lower amount but she decided to stay with the amount she'd previously won in the show.

The player managed to sail through to the final chase but she did stumble on one film question.

Taking to Twitter, one fan penned: "She doesn’t know who Christopher Plummer is? Has she not watched The Sound Of Music?"

A third person posted: "How the hell does someone not who Christopher Plummer is?! The mind boggles."

He was a Canadian actor and his career spanned seven decades, gaining recognition for his performances in film, television and theatre.

Plummer won great acclaim for this performance as Captain Georg von Trapp in the musical film The Sound of Music alongside Julie Andrews.

Back in the studio, Daniel, Suzanne and Calum took on Shaun in a quick fire round of questions in the final chase.

The Chase airs weekdays on ITV at 5pm