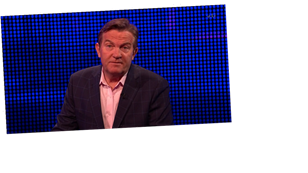 The Chase returned to our screens this afternoon for the latest instalment of the ITV quiz show.

Host Bradley Walsh welcomed four new contestants to the show today for the first episode of the week.

The cheeky presenter was eager to see them get through to the final with some money in hand.

Paul "The Sinnerman" Sinha was in the hot seat tonight trying to prevent the hopefuls from going home with the cash prize.

Self-confessed pub quiz master Mick was the first contestant to take on the quiz.

He answered five questions correctly in the cash-builder round which got him £5,000 in the kitty.

Things took a turn for the worst for Mick as he failed to win the head-to-head round against The Sinnerman.

ITV viewers rushed to their keyboards as they were left gobsmacked at the pub quizzer failing to get through to the final chase.

Taking to Twitter, one fan penned: "Shocked that Mick didn't get through as he is a quizzer."

A third said: "Mick has lost his marbles."

The Chaser's win comes just one day after the show's star Mark "The Beast" Labbett hit back at trolls who claimed the quiz show is fixed.

The ITV quizzer said: "They write a lot of rubbish and it's often from accounts without any back name attached.

"It's so easy for J Bloggs with a blank profile picture to say it's a fix.

"But when you ask them to explain how, they can't.

"No-one has ever investigated it or put in a complaint to Ofcom. They make comments, but don't actually look into it."

The Chase airs weekdays on ITV at 5pm