“The Talk” debuted on CBS in 2010, and there have been a lot of buzzworthy co-host changes over the years. Many stars have come and gone, and viewers have strong opinions regarding which host they want to leave next. In a survey of nearly 600 Nicki Swift readers, almost 30% of them agreed one current “The Talk” co-host would be their pick to be eliminated over the others.

As Us Weekly detailed, “The Talk” debuted with Julie Chen, Sharon Osbourne, Sara Gilbert, Holly Robinson Peete, and Leah Remini together as co-hosts. The show has aired for more than a decade now, and all of those original personalities have moved on and been replaced. Quite a few departures were particularly dramatic, such as Osbourne’s exit after a heated on-air segment. Then Chen left in the midst of CBS parting ways with her husband Les Moonves (she said she wanted to spend more time with her family).

A wide range of celebrities have been tapped to co-host “The Talk” since. Actors Marissa Jaret Winokur and Aisha Tyler came and went, per Us Weekly, as did rapper Eve. Carrie Ann Inaba of “In Living Color” and “Dancing with the Stars” joined the group, and iconic entertainer Marie Osmond stayed for a brief period of time. After Osmond’s exit, Amanda Kloots and former Teen Vogue editor-in-chief Elaine Welteroth were added as new co-hosts, detailed The Sun. Which of the current hosts would “The Talk” viewers eliminate if they could? The results might surprise you.

'The Talk' viewers were fairly divided 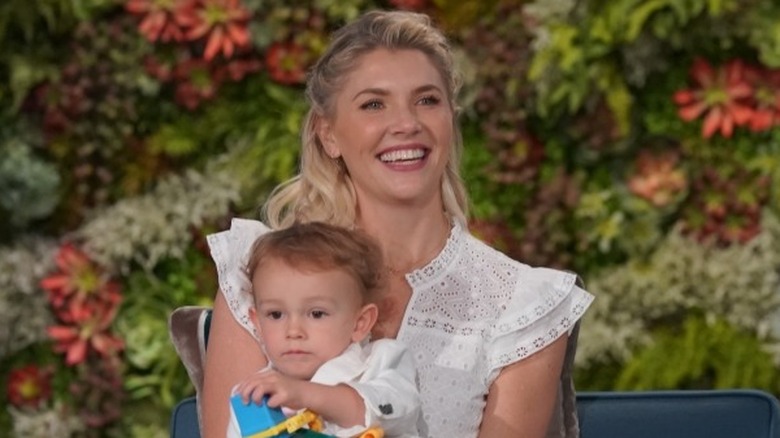 Nicki Swift surveyed 598 people asking which co-host of “The Talk” they would eliminate if they could, and Amanda Kloots received the highest number of replies. Kloots received 29.1% of the responses, and her presence on the show definitely seems to have divided fans on a number of occasions. For example, in February she ruffled feathers by getting a COVID-19 vaccine by what some deemed was essentially jumping ahead of others.

Kloots has also spoken about the criticism she has received after her husband Nick Cordero died of COVID-19 complications. “Being a woman, people expect you to wear black every day for a year and cry and mourn that person,” she told The Daily Beast. “I do think that there is a stereotype of a woman that you can’t smile two weeks after your husband passed. God forbid you’re working out or trying to maintain your business,” she added. A number of “The Talk” fans seem to feel as if Kloots tends to be insincere as well. “Amanda Kloots converted her tragedy into a place on #TheTalk? I knew there was something disturbingly performative about her,” one person tweeted when the announcement was made in January.

While Kloots topped the Nicki Swift survey, the results were fairly evenly split among the other co-hosts of “The Talk.” Carrie Ann Inaba received 24.25% of the votes and Elaine Welteroth was chosen by 23.75% of the respondents. Sheryl Underwood received the fewest votes at 22.91%.