The crushing of Hong Kong's freedom is a victory for despots

IAN BIRRELL: The hideous crushing of Hong Kong’s freedom is a victory for despots over democracy

The first arrest was a man clutching a black flag inscribed with the words ‘Hong Kong Independence’ in both English and Chinese.

By the time dusk fell over the skyscrapers and ferries of one of the world’s great cities, another nine protesters —including a 15-year-old girl and a woman with a sign featuring the British flag — had been seized under a harsh new security law.

Created in secrecy by Communist Party chiefs in Beijing, this draconian measure is designed to throttle the freedoms that made Hong Kong such a special place. Its sudden imposition marked a dark day for democracy with big global consequences.

Those protesters now risk life imprisonment. They can be carted off into China’s sinister network of compliant courts and brutal jails as President Xi Jinping tightens his grip on the former British colony.

Yet still, thousands joined the territory’s annual rally to mark the anniversary of its handover to China in 1997 with hundreds of pro-democracy protesters seized by the increasingly thuggish police force. 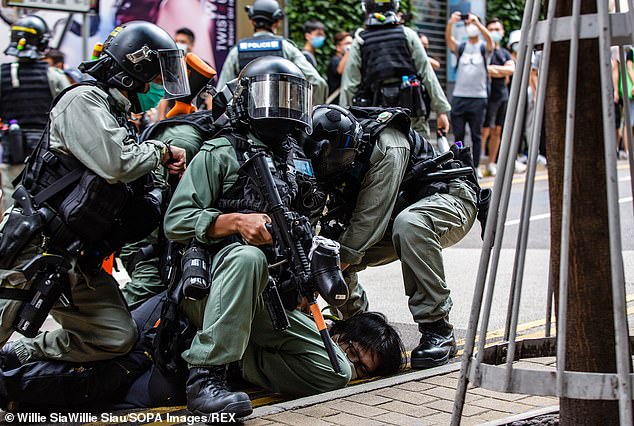 Crowds chanted slogans such as ‘resist till the end’, despite fusillades of pepper spray and pellets. One man admitted he was scared of going to jail, ‘but for justice I have to come out today, I have to stand up’.

Such bravery is impressive, as I saw for myself last year, spending three weeks with these protesters amid the tear gas and baton charges as citizens raised in comparative freedom fought the repression of Communist China.

At a time when the West is so disturbingly complacent over its own democracies, it was inspiring to meet protesters prepared to risk everything to protect liberties that we take for granted.

Most were young, affable and highly-educated. They admitted to their fears and the probable futility of taking on the might of the Chinese state with umbrellas and wok lids (to place over rounds of tear gas). ‘What alternative do we have?’ asked one.

Yet it was also sad talking to such youthful idealists given the near-certain trajectory of their struggle. ‘I will keep fighting because this is our home and we must protect our freedoms at all costs,’ said one 18-year-old student, admitting she was terrified.

When I asked another young woman why she took such risks, she told me of visiting a Chinese city and being fined for jay-walking, the money taken from her online bank account by the time she had crossed the street thanks to all the facial recognition cameras. ‘Who wants to live in such a society?’ she asked rightly.

These people sought to avoid being sucked into a state relying on repression and technology to control one fifth of the world’s population. Now they fear for their future trapped in the straitjacket of China’s Orwellian society.

The chilling new security law was drafted in secret with even Carrie Lam, Hong Kong’s dismal and subservient leader, kept in the dark — then imposed on Tuesday. 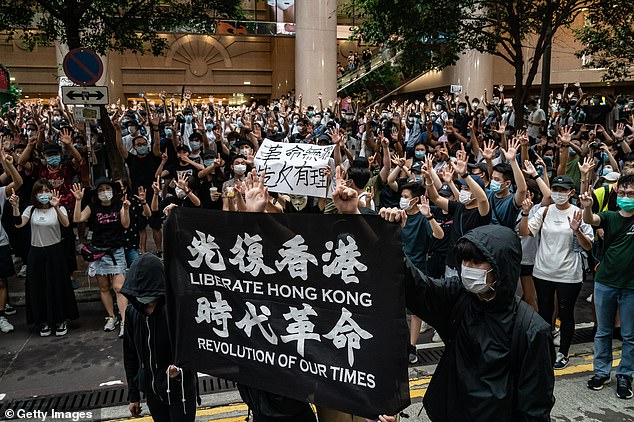 Pictured: Demonstrators take part in a protest against the new national security law on July 1, 2020 in Hong Kong, China

Yesterday, people were deleting social media accounts, fearing that family members who had voiced criticism would not be allowed back to visit them, and wondering if they might, one day, be carted off to a Chinese cell under the deliberately vague legislation.

‘We have to be very careful what we say since you have no idea what is a criminal offence now,’ one activist told me. ‘We all know the consequences if we are taken to China and forced to confess.’

The new law is designed to end the protests that exploded early last year, convulsing the territory. It has four core offences — separatism, subversion, terrorism and collusion with foreign countries — that allow authorities to target dissidents at will.

The measure unleashes Chinese security agencies to operate openly for the first time, permits courts to hear cases in secret and even applies to foreign nationals, provoking fears that critics could be prosecuted when entering the territory.

This moment marks the death of the ‘one country, two systems deal’, which was agreed with Britain under the 1984 handover pact and supposed to have been kept for 50 years after Hong Kong was returned to China.

Clearly it shows that Beijing under Xi Jinping, its aggressive nationalist president, cannot be trusted. Boris Johnson deserves credit for his firm response in offering three million residents the chance to settle in this country. 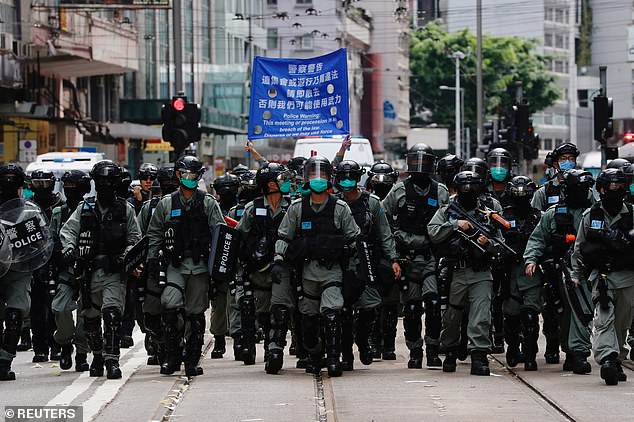 These events underline our naivety in dealing with China, especially since Xi won power in 2013. Beijing had, after all, made its intentions clear six years ago with a white paper insisting it had ‘comprehensive jurisdiction’ over Hong Kong.

Yet first we thought trade would corrode Communist autocracy, then we hoped the internet could destroy dictatorship. David Cameron tried to chum up to Xi with boasts of a ‘golden era’ and toe-curling talk of helping ‘deliver the Chinese dream’.

But as those Hong Kong protesters know all too well — and despite China’s amazing economic rise — China’s president is delivering a dystopian nightmare to his 1.3 billion citizens while rapidly building up military strength and flexing his growing power.

Earlier this week, it was revealed that Beijing has allowed a forced abortion and sterilisation programme on Muslim minorities in Xinjiang, who have already been subjected to 24-hour surveillance with many thrown into concentration camps.

One survivor of these awful places intended to crush traditional cultures told me of enforced medical treatments and horrific torture ranging from beatings and mass rape to medieval-style devices such as a nail-studded chair.

China has embraced the digital age yet found ways to ruthlessly control citizens with technology.

It is even creating a ‘social credit’ system to thwart ‘negative’ attitudes, which bars those failing to stick to its strict diktats from the best jobs, schools and rail services. 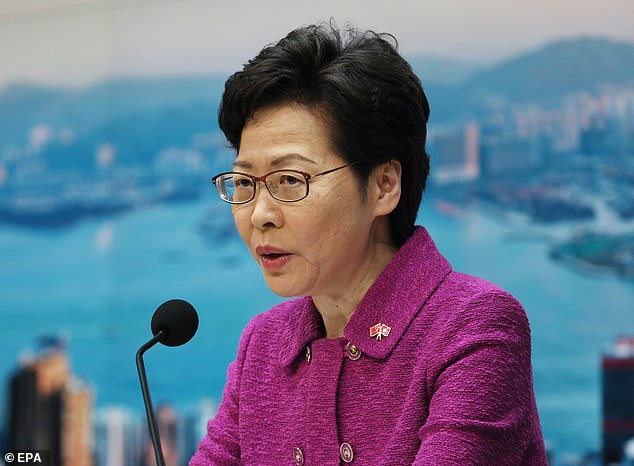 Hong Kong is, unfortunately, probably beyond salvation. But we must be aware of the implications as the world slides into a new Cold War tussle between autocracy and freedom.

For Xi, the ultimate prize is Taiwan — an island beacon of democracy just off China’s coast, once the refuge for forces defeated by Mao’s Communists, which he seeks to ‘reunify’ with its ‘motherland’.

Now the crackdown in Hong Kong has showed the hollowness of its promises — so support for China has unsurprisingly crashed.

This hideous crushing of Hong Kong, regardless of the consequences for one of the world’s financial centres, shows China’s Leninist leadership has abandoned any hope of seducing Taiwan with sweet talk of freedom.

Meanwhile, China has shown it will brazenly use coral atolls in the South China Sea to expand its terrain and slaughter Indian solders on a disputed Himalayan mountainside.

So how will the West respond if China tries to attack or blockade its ally Taiwan?

As one protester in Hong Kong said to me, this is a long battle between democracy and despotism. ‘Who knows how it will end?’ he asked.

Related posts:
Latest News:
Showtime Developing Comedy Series ‘New Money’ From Gabrielle Union, Jemele Hill, Kelley Carter & Sony Pictures Television
Why Gaming Social Network Enthusiast Wants to Be on NASDAQ
Why Andy Griffith Received the Presidential Medal of Freedom
Netflix announces pandemic-inspired comedy from creator of The 40-Year-Old Virgin – and fans are already divided
Recent Posts
This website uses cookies to improve your user experience and to provide you with advertisements that are relevant to your interests. By continuing to browse the site you are agreeing to our use of cookies.Ok