The doorstep is the new town where people discuss everything 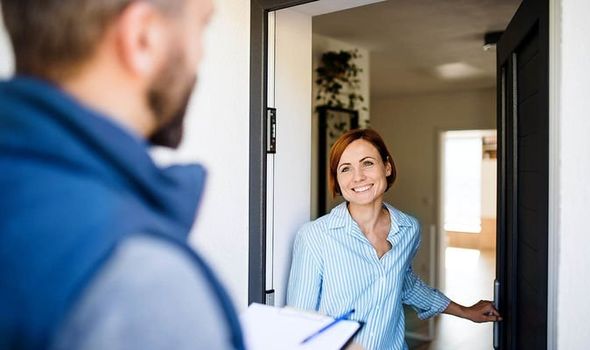 The study of 2,000 adults found nearly half have had more conversations at their front door since the pandemic began, averaging three chin wags a week. And more than four in 10 have discussed more in-depth and personal topics than ever before on the doorstep, including their health (26 percent) and how they are feeling (23 percent).

A third have also spoken to their neighbours more since the start of the pandemic, with 32 percent feeling there’s been more opportunity while 23 percent now have something in common to talk about.

But it’s not just important conversations taking place on doorsteps, as nearly one in 20 have either got engaged, or witnessed an engagement take place at the door over the past year.

And the same number have met a new member of the family at the entrance.

A spokesman from Eurocell Home, which commissioned the research, said: “Since the pandemic began, the front door has become an unexpected, but welcome spot for many of life’s moments.

“It’s no longer somewhere you enter and exit your home, but now somewhere you can catch up with those you care about – and even make new friends and build new relationships.

“The research has certainly shown the change in behaviours during this time and the importance of doorstep moments between family, friends and neighbours.”

The study also found handing over birthday presents and exchanging Christmas gifts have been common occurrences on doorsteps, as well as clapping for the NHS and delivering food to neighbours or relatives.

It also emerged neighbours, delivery people and the postman were most likely to stop for a chat, with the average conversation lasting approximately six minutes.

One in six have gossiped about other neighbours, while a quarter have spoken about activities such as walks in the local area.

Lockdown itself has proved a popular topic to discuss (45 percent), along with the weather (38 percent) and the news (34 percent).

More than four in 10 (43 percent) even see a natter at the door as the new ‘popping round for a cuppa’.

But one in six have worried about being overheard chatting on their doorstep while 13 percent have admitted to listening to others.

Friendships have also blossomed as one in six have made new pals following their doorstep chatter according to the research via OnePoll.

And 41 percent hope to continue their newfound conversations with neighbours once normality eventually returns.

A spokesman from Eurocell Home, added: “The front door has become more than just a door, but a place where you can see key people in your life, as well as newfound friends.

“It’s always been a vital part of the home in terms of keeping people safe and warm, but now clearly has further meaning to the nation.”