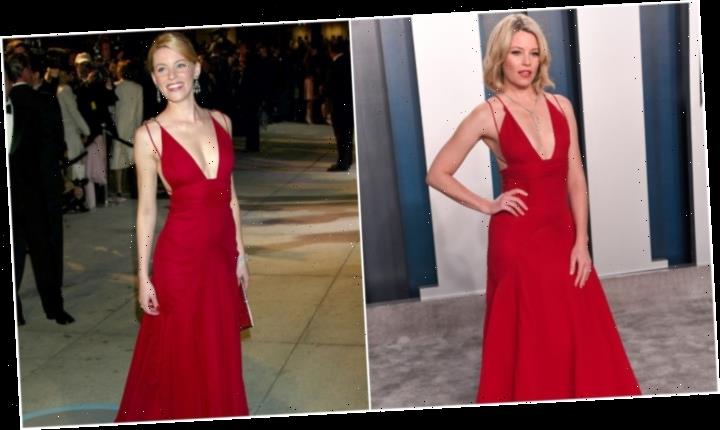 The latest fashion flex? Rewearing an Oscar dress — aka flaunting your commitment to preventing climate change and your ability to fit into a past outfit. The 2020 Academy Awards were dotted with sustainable fashion choices, intentional or not, and we champion the recycling.

Arianna Huffington recycles fashion like the Duchess of Cambridge, only with more autonomy. “When you own something you love, wear it again and again,” Huffington posted. “It saves time, money, mindshare and the environment!”

Next up, Elizabeth Banks. The director, actress and producer graced the Vanity Fair after-party in a dress from 16 years ago, proving that she just doesn’t age.

“It’s gorgeous and it fits … so why not wear it again?!” Banks revealed on Instagram. The red Badgley Mischka number was indeed worn to stress the “importance of sustainability in fashion and consumerism as it relates to climate change, production & consumption, ocean pollution, labor & women.” Banks partnered with RAD, a red carpet philanthropy, and the New Standard Institute to help brands lower their carbon use and achieve sustainability.

Joaquin Phoenix, the green superhero of the 2020 awards season, wore the same Stella McCartney tux on his “Joker” victory tour, picking up trophies at just about every ceremony.

Not only was Jane Fonda’s Oscar frock a recycled look, but her accessories were ethically sourced as well. The actress was adorned with Pomellato jewelry, “because it only uses responsible, ethically harvested gold and sustainable diamonds.”

Perhaps the very best Oscars re-wear moment was Rita Moreno’s 2018 revival of the dress she wore to accept an Oscar in 1962. The black and gold number was repurposed with a strapless neckline and headpiece. The actress took home gold for her supporting role of Anita in “West Side Story.”