BRANDON FLOWERS calls The Killers’ new album Pressure Machine “a curveball” a year on from their poppy and synth-heavy Imploding The Mirage.

He says: “On this album we are experimenting with more roots-driven Americana music. 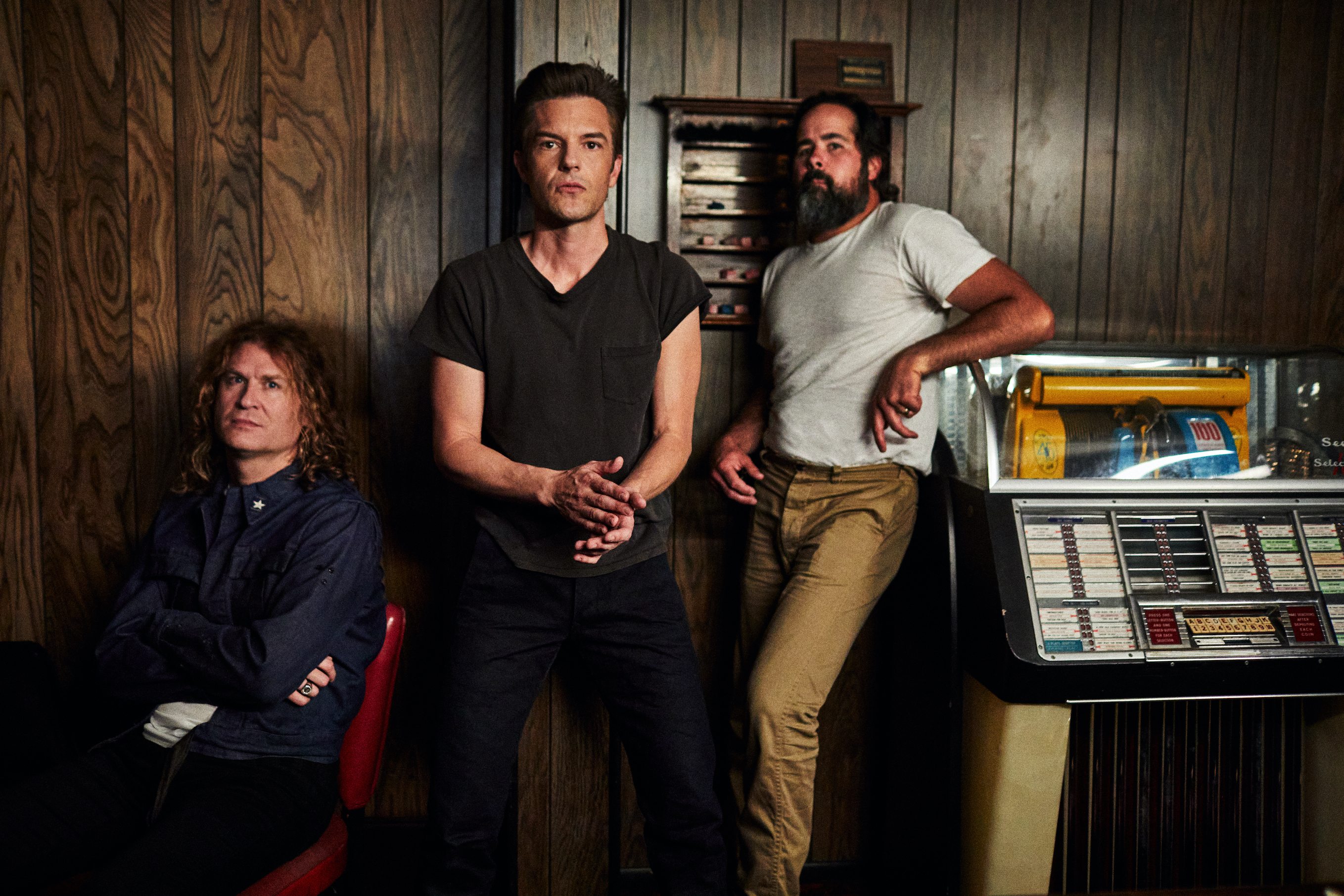 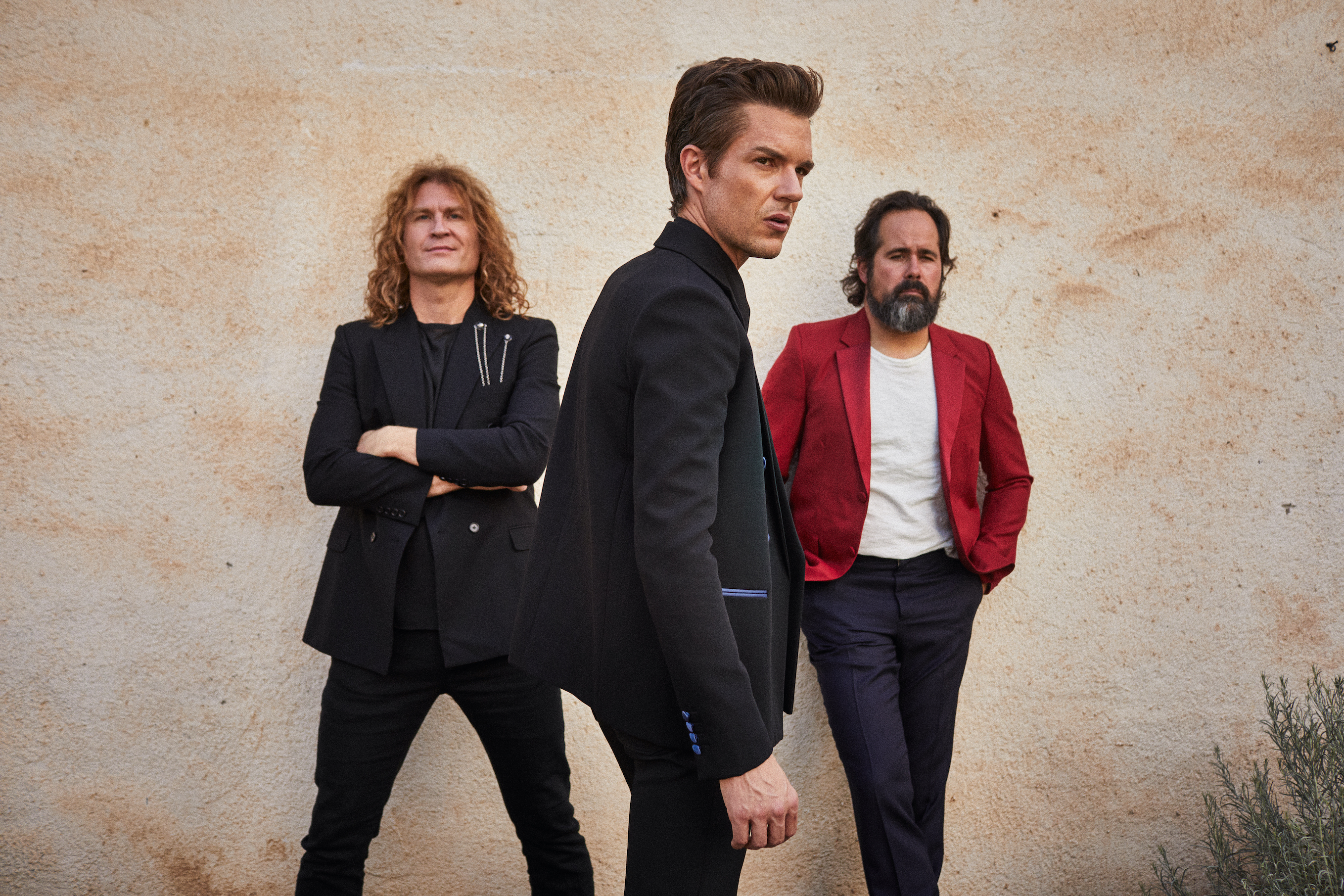 “We realised early on some people were committing to one road in their identity as a band — and that is limiting.

“There are bands that pull it off but we have so many different influences and as we get older and absorb more, I actually like the music my dad liked and that’s a part of me too.”

It’s a concept album born of lockdown seclusion, which started Flowers thinking about his youth and formative years as a Mormon in the small town of Nephi, Utah.

He says: “I was in a town and felt isolated, like I did in lockdown. I started thinking about the people who were misfits and outliers in that town.

“Having lived a moral life with more experience, I now have a renewed understanding of those characters I would’ve painted with a mean brush or been quick to judge. I have more empathy for them now so I went back into my memory and tried to work them out through songs.”

He adds: “When I moved to Nephi I didn’t feel I belonged, as I was from Las Vegas. Here I was, in this very rural country town, where there’s a rodeo, people chew tobacco and wear Wrangler jeans that only country music people wear.

“I wanted to get the hell out. Now I’ve grown to love those things. They are iconic American, Western things.

“And Nephi is beautiful. It’s in the shadow of Mount Nebo, which is one of the highest peaks in Utah. But I didn’t see its beauty when I was there. I didn’t appreciate it.”

On a video call from his home in Park City — about 90 minutes from Nephi — Flowers is chatty and relaxed, wearing a black baseball cap and sweatshirt. This is “normal dad” Flowers, a world away from the sequin-jacketed frontman we see on stage.

It is a stunning album, from opener West Hills to In Another Life, a song about broken dreams, and the regretful In The Car Outside.

The record is about vulnerable local characters and stories set around the American opioid crisis, taking in religion, guilt, alienation and dreams of escape.

It’s an entertaining and different video call with drummer Ronnie Vannucci Jr as we chat while he makes a 13-hour drive from Utah to California.

As his wifi signal drops in and out, his voice sometimes sounds like Darth Vader’s. He says: “I think that Brandon just gets better and better at writing lyrics. I was drawn in because I’m familiar with the town and his stories but it’s awesome to see him elevate with each record.

“I think he’s gotten more comfortable about talking about real-life s**t. The last few records have been just that. I like the way that feels.”

For the first time in his life, Flowers had complete lyrics before a note of music was put to tape. The tracklist had been kept under wraps until last week, while audio captures real-life stories and soundbites from Nephi locals between each song. He says: “I wish it was my idea to record real people but it was our producer, Shawn Everett.

“It was last-minute. The album was complete. It was mixed and we were mastering it when he had this idea.

“We didn’t think we were going to get it done in time but we sent a public-radio person from Salt Lake to Nephi who interviewed people for a day and we added them at the last minute. It’s now one of my favourite things about the record.

“Subsequently, we are going to put out a mini-documentary that accompanies the record. And some of the same people you hear will be on that.” Vannucci adds: “We got director Robert Machoian, who made The Killing Of Two Lovers, involved.

“We have something coming out with him soon.”

Working with Phoebe Bridgers on the song Runaway Horses came from a mutual admiration.

“It was just a nice surprise. She had made a beautiful rendition of Read My Mind — it’s beautiful — and then she covered our song Human one time.

“She also has rodeo people in her family, so it was kind of a perfect song for her.”

Vannucci says: “We did a shot of whisky and Phoebe went into the studio and did it in 45 minutes. She kicked it out fast.”

Sonically, Flowers says, fans will find things on Pressure Machine they have not heard on a Killers record before.

“There’s harmonica, fiddle and pedal steel,” he says. “They really help you immerse. I feel like the listener in the town.

“We wanted it to feel authentic and that’s because of the instrumentation.”

The result is a spellbinding album that will be hailed as a classic for the Las Vegas band.

Another stunning song is The Getting By, which features Taylor and Griffin Goldsmith of Dawes on backing vocals. Flowers says: “Getting them involved comes from my inability to figure out what the harmonies were supposed to be!

“It’s a real thing that brothers and siblings are able to sing so well together. I sent the song to them and they sent it right back in its current form. It’s just beautiful. They’re so good.”

The hopeful song is inspired by Flowers’ parents and how hard they worked to raise six kids.

Flowers says: “There are a couple of moments like that. On (title track) Pressure Machine and the third verse of Quiet Town, I explore my gratitude for the way they raised me in that town.

“The life I had there was completely different from if I’d stayed in Las Vegas. It was free and like being in the Fifties when I was there. The cliches about people not locking their doors were real. I look back at it with much more fondness now.”

Flowers was raised a Mormon and adds: “When I was there, it was 90 per cent Mormon, so everybody’s Mormon.

“My memories are of people disenchanted with religion who were not subscribing to it.

“As I’ve got older, I’ve gained more understanding and see them through a different lens, more forgiving.”

A song dealing with the frustration of living the American dream, Quiet Town tells of the opioid crisis that swept through the US, including Nephi.

Flowers says: “During the pandemic there were more overdose deaths than in any other year, so it’s gotten even worse.

“It’s affected my family and Ronnie’s family and friends. It tore through Nephi. It’s like a microcosm for America.”

When we last spoke, Flowers was looking ahead to the presidential election, hoping to see the back of Donald Trump.

What does he think of Trump’s chaotic departure?

“It was scary. A lot of people were wondering what was going to happen if he decided not to leave. Thank heavens he went peacefully, though there were still people recounting votes in Arizona not that long ago.

“We have an understanding and even though it’s a lot easier with just two people than four in the band, I miss the other two guys.

“It was wild but it’s calmed down. Joe Biden has a lot more reverence for the office, so there’s less anxiety since he’s taken over.”

In Another Life deals with dreams of escape. Flowers’ ambition to be a singer only came when he moved back to Vegas.

He says: “It wasn’t until I had left Nephi and got a job at a golf course in Las Vegas that I felt I could be in a band.

“I met this eccentric guy there who had been to film school and loved Depeche Mode, Pet Shop Boys and New Order, like me.

“We started a band when I was about 18 and that was the first time I had ever dipped my toes in those waters. Meeting Dave Keuning (guitarist) at 19 was when everything changed.” On Pressure Machine, Flowers and Vannucci reunited with Keuning, who quit touring in 2017 to tackle family issues, citing exhaustion.

“People don’t understand how hard it can be,” says Vannucci.

“But he was open and dealing with life stuff meant he didn’t have time for the band. But we cut him some slack and there’s no drama in it.

“We have an understanding and even though it’s a lot easier with just two people than four in the band, I miss the other two guys.

“But everybody’s on their own trajectory and I respect that. And he really excelled on this album.”

Flowers says: “There’s a bit of a revolving door now in The Killers — and it works. Maybe that will be an example for bands in the future. It’s not an all-or-nothing situation that we have.

“On the last record, Mark Stoermer (bassist) was on it and Dave wasn’t. Mark wasn’t on this record but Dave is.”

Much of the storytelling on Pressure Machine is like that of Bruce Springsteen, with whom they teamed up in June for Dustland, a new version of their 2008 song A Dustland Fairytale.

Did working with him inspire the new album?

Vannucci says: “By the time we got things done with Bruce, we were pretty much done with this record. But working with that guy was cool. Bruce is an intrinsically nice guy.”

Flowers agrees, saying: “I get nervous when Bruce calls, but I’ll take it. He helped open the door for me to write about regular people. He’s one of a few people where I still feel like I’m a fan.

“Elton John would be surprised to hear I still get nervous when he calls, too.”

Having still not toured their last album because of the pandemic, Flowers is excited to be returning to the stage next week, including a special show in New York’s Central Park with Springsteen, Paul Simon and Elvis Costello.

He says: “It’s wild to think we haven’t played a note of Imploding The Mirage in front of living, breathing people yet.

“We’re proud of that album and the accolades. Touring has become a big part of our identity and I’m still very much looking forward to playing songs like My Own Soul’s Warning and Caution.

“This album — I’m proud of it and I can’t wait to get out and play live. Those songs were tailor-made for big rooms.

“I think we need that third Glastonbury headline slot!” 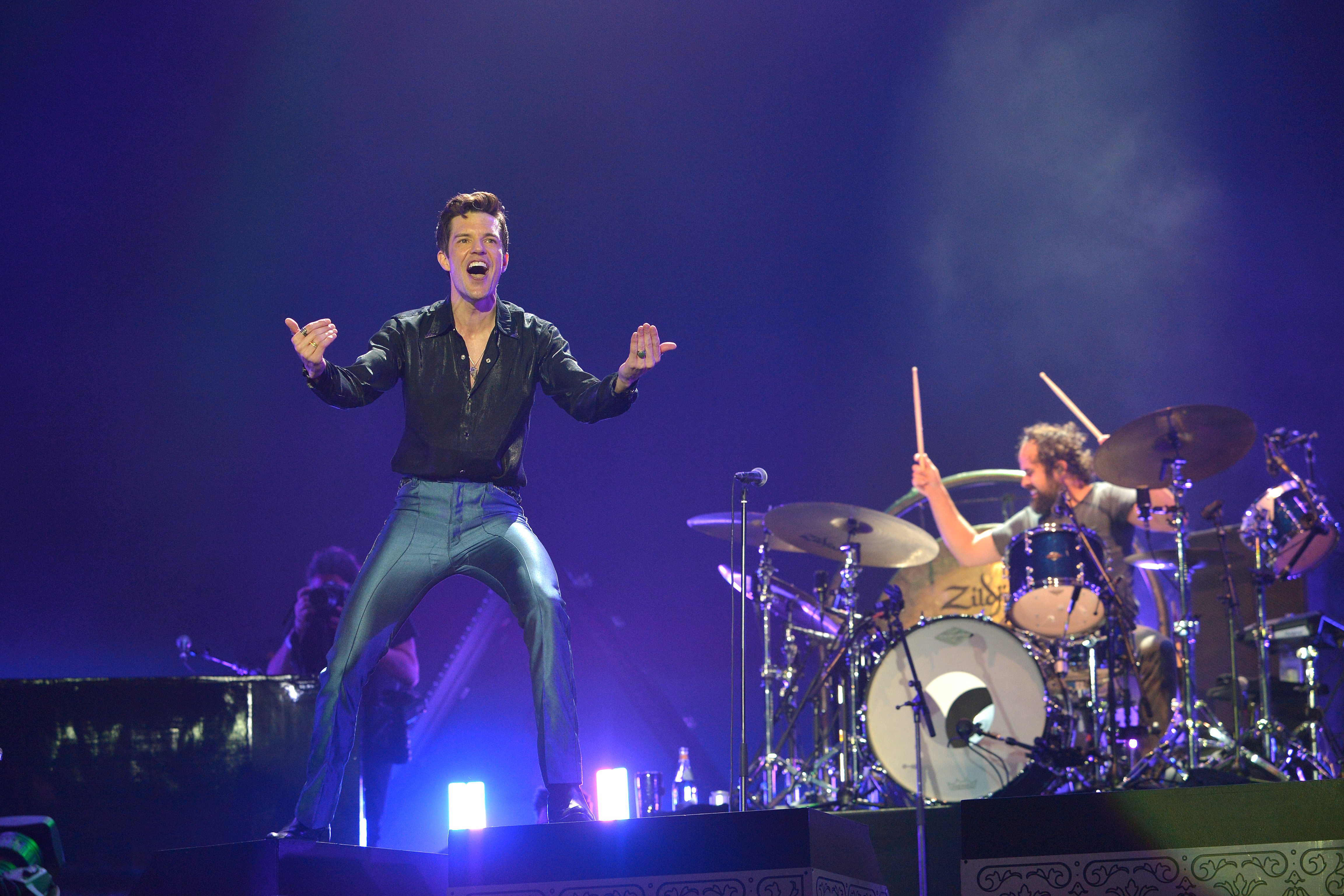 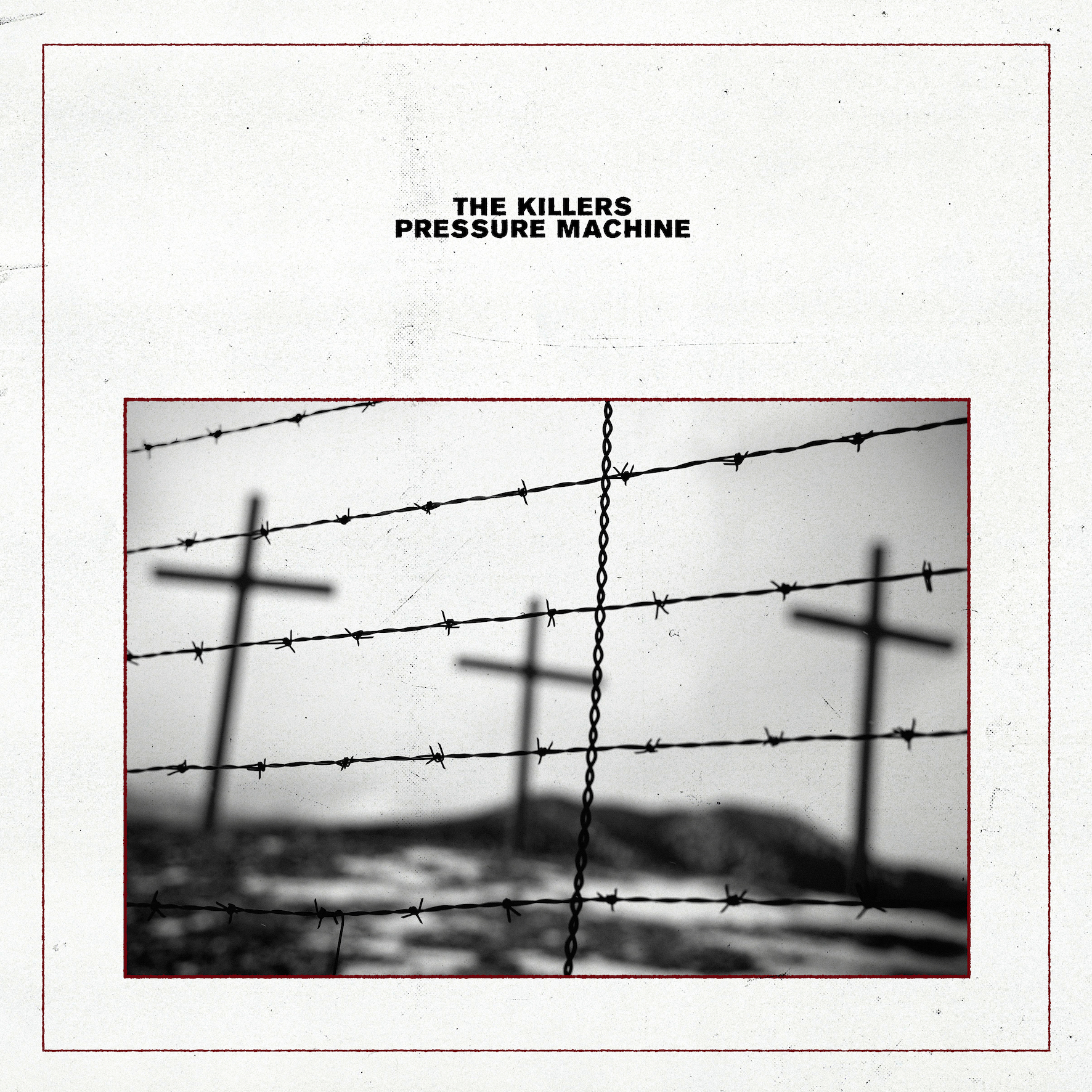