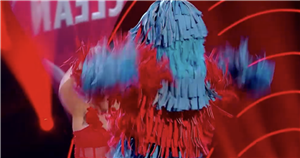 The Masked Dancer fans were convinced they've figured out the identity of one of the show's mystery contestants as Carwash took to the stage once more on Tuesday night.

Carwash performed to a medley of Grease songs, and included an impressive backflip in their routine.

But though the panelist were convinced it had to be a member of a boyband – with Oti suggesting Jay McGuinness from The Wanted – fans on Twitter were certain it was someone else entirely.

As one of the clues given during two lies and a truth was that Carwash was "I get all my energy from Vitamin C", social media users were sure that was a clue to their true identity.

And they think former Take That star Jason Orange could be behind the mask.

Someone else rushed in to say: "I thought Howard Donald until he said my name has Vitamin C in it and then thought Jason Orange!", as a third keen-eyed viewer penned: "Is Carwash Jason Orange? Vitamin C. Confident but quite shy?"

Another quickly typed: "The song Carwash danced to in #MaskedDancer was performed in concert by Take That once. The Vitamin C clue could be for Jason Orange but I can't see him doing the show."

Jason famously quit the band in 2014, after making the decision that he didn't want to tour or make music any longer – and since then, he's led an incredibly private life.

Another clue might have been enough to throw people off from the theory, however, as a car with a registration plate beginning with 'Mc' traversed a drive-through car wash.

It led others to speculate that it could be a member of McFly or McBusted – though they weren't quite sure who.