Scott Morrison has suggested “can-do” capitalism is the answer to climate change. And the Prime Minister is right – but only if he is willing to reward initiative-taking firms with the right set of incentives.

Some firms are going to make money from developing green energy alternatives – especially now that the government is subsidising those firms and their access to capital. It has been suggested that the $1 billion Low Emissions Technology Commercialisation Fund might result in new investment in emerging techniques such as direct air capture and storage, or methane-reducing livestock feed. That’s good news for early stage green-tech firms looking for cheap capital. 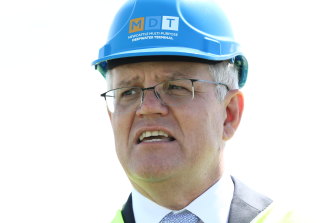 But many firms are going to look at these new green alternatives and say: “I can, but I won’t.” These alternatives do not enhance my bottom line. Why? Because even with great technological advances they are likely to be more expensive than coal for quite some time – unless one accounts for the true social cost of coal, which includes its environmental damage.

There’s a reason fossil-fuel technologies have been so dominant for so long. It’s because they are cheap when one only considers the financial cost, and not the environmental cost. The success of a green technology push requires factoring in the social cost of energy. This puts all technologies on a level-playing-field, and thus provides the right incentives for adoption as well as innovation.

Take carbon capture and sequestration – a technology that can substantially reduce carbon emissions from coal-fired power plants. This is an existing technology that could no doubt be refined. It exists and it works – we don’t need a billion-dollar slush fund to develop it. But it is expensive to implement, and reduces the energy produced by those plants by approximately 20 per cent.

So if plants are owned by private companies, who don’t think about social costs and benefits, there will be little incentive to adopt carbon capture. The can-do attitude for these businesses is “yes we can pollute and stay profitable”.

The only way can-do capitalism makes sense, as an environmental policy, is if the government adopts a price on carbon, or an equivalent market-based policy such as the cap-and-trade model proposed by the Business Council of Australia through tightening the existing safeguard mechanism.

If there is a price on carbon, polluting costs businesses money. So the can-do attitude becomes about how to reduce those costs, and with them, the pollution itself.

Other businesses will then also have an incentive to invest in green technologies, even without a government subsidy, because they know that can-do capitalists will be interested in purchasing that technology – to reduce their tax burden, and costs.

Capital markets will also see this and be more willing to lend to green-tech start-ups.

A carbon price has a chequered political history in Australia. But that history should not obscure the fact that it is the only real way for can-do capitalism to be a form of can-do environmentalism.

It is also a policy that has increasing support in the business community, and globally.

Without a price on carbon, we will be paying the price in lost tax revenue – because our export-businesses will have to pay it anyway (but not in Australia) through carbon-border-adjustment taxes.

Can-do policies are a good idea, but only if they understand how and when markets can work to our benefit: when businesses have an incentive to reduce emissions because doing so reduces their tax burden, and increases their profit.

It is hard for the government to admit this politically. But we know they can.