The Queen Can Drive Without A License. Heres Why

If you’re a member of the royal family, chances are you’re getting around via a plane, train or a Range Rover, according to Town & Country.

Queen Elizabeth is usually driven to official events, but she’s behind the wheel if she is out of the public eye, per Hello magazine. She is reportedly a fan of Land Rovers and Range Rovers and knows how to handle tough terrain. Plus, the queen reportedly taught her children how to drive on her Balmoral estate.

The queen became familiar with cars when she joined the Women’s Auxiliary Territorial Service in World War II, per the outlet. It was here where she learned how to drive, change a tire, and rebuild engines. She even became a mechanic and drove ambulances. Her hard work clearly paid off, as she became honorary junior commander.

But did you know she doesn’t need a license to drive? And that’s not all she gets a pass for. Keep reading for more details.

Queen Elizabeth does not need a license plate, either 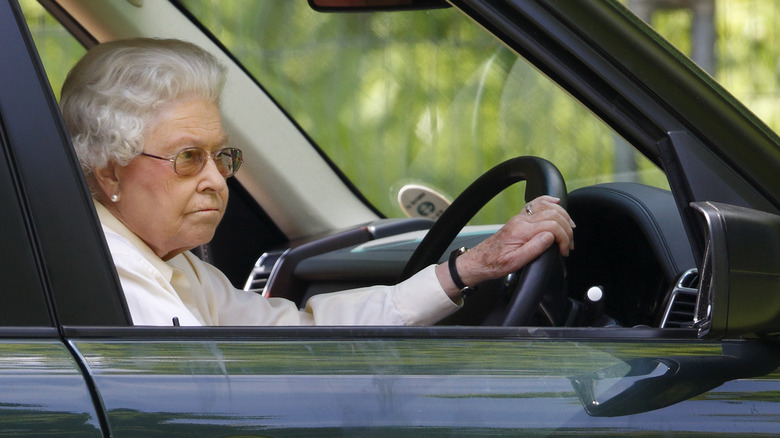 Queen Elizabeth enjoys many privileges as a royal and one of them is driving without a license, according to Express.

Per the outlet, she is the only member of the royal family who can drive without a license as part of the “royal prerogative.” All of the driver’s licenses in the United Kingdom are issued in her name and she does not have to take a driver’s test. She also does not need a number plate on her vehicles.

Former prime minister David Cameron reportedly said the queen would drive around her Balmoral estate at “breakneck speed.” Her need for speed was documented during King Abdullah of Saudi Arabia’s 1998 visit. Former British Ambassador Sherard Cowper-Coles told the Sunday Times (via Hello magazine): “As instructed, the crown prince climbed into the front seat of the front Land Rover, with his interpreter in the seat behind. To his surprise, the queen climbed into the driving seat, turned the ignition and drove off. [At the time] women are not — yet — allowed to drive in Saudi Arabia, and Abdullah was not used to being driven by a woman, let alone a queen.”

He continued, “His nervousness only increased as the queen, an army driver in wartime, accelerated the Land Rover along the narrow Scottish estate roads, talking all the time. Through his interpreter, the crown prince implored the queen to slow down and concentrate on the road ahead.”