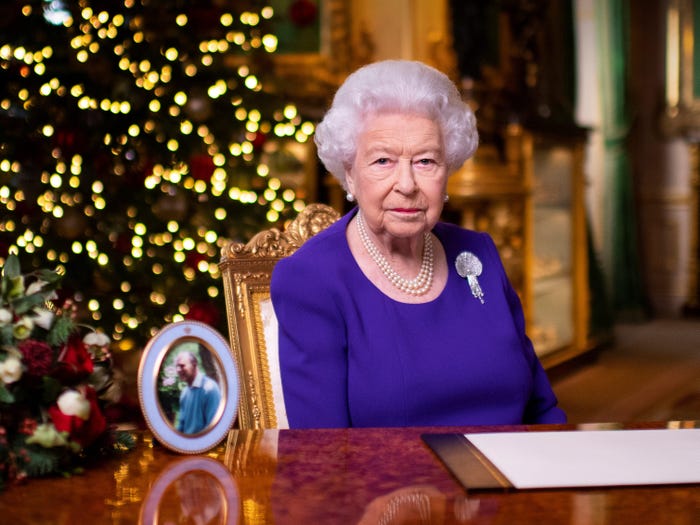 In her annual Christmas speech, Queen Elizabeth II reflected on a year of challenges and unity brought on by the coronavirus pandemic and offered a wish for the new year: "We need life to go on."

The 94-year-old monarch began her speech by recognizing the significance of light in several religious and cultural communities.

"For Christians, Jesus is 'the light of the world,' but we can't celebrate his birth today in quite the usual way. People of all faiths have been unable to gather as they would wish for their festivals, such as Passover, Easter, Eid, and Vaisakhi," the Queen said in her speech. "But we need life to go on."

"Last month, fireworks lit up the sky around Windsor, as Hindus, Sikhs, and Jains celebrated Diwali, the festival of lights, providing joyous moments of hope and unity despite social distancing," she added.

The Queen continued by noting that the year's challenges have united communities in the UK and around the world — a sentiment similar to what she expressed in two rare speeches she gave in April of this year: one addressing the coronavirus pandemic, and the other commemorating Easter.

"Remarkably, a year that has necessarily kept people apart has, in many ways, brought us closer," the Queen said in her Christmas Day broadcast. "Across the Commonwealth, my family and I have been inspired by stories of people volunteering in their communities, helping those in need."

The royal also offered her thanks to frontline workers who continue to "shine that lamp for us — supported by the amazing achievements of modern science."

"We continue to be inspired by the kindness of strangers and draw comfort that, even on the darkest nights, there is hope in the new dawn," the royal said.

She also recognized that for many, the holiday season may be "tinged with sadness," as people are "mourning the loss of those dear to them, and others missing friends and family members distanced for safety, when all they'd really want for Christmas is a simple hug or a squeeze of the hand. If you are among them, you are not alone, and let me assure you of my thoughts and prayers."

The Queen's Christmas Day speech has been a tradition since 1952

Since 1952, the Queen's voice has filled the homes of people around the world on Christmas Day. The royal Christmas Broadcast started in 1932, when the Queen's grandfather, King George V, gave the first address.

The Queen's Christmas Day speech was skipped only one time — in 1969, when a documentary, "Royal Family," aired on TV in place of her address.

The Queen filmed her 2020 broadcast on Christmas Eve from Windsor Castle, where she has been isolating with Prince Philip since March. It's the first time since 1988 that the Queen has spent the holiday away from her Sandringham Estate, where the royal family traditionally gathers for Christmas.

This year, the monarch's speech was televised in the UK, broadcast on the royal family's official social media accounts, and for the first time, available via Amazon Echo.

This year, a British TV channel came under fire for airing a deepfake version of the Queen's speech

On Friday, prior to the Queen's official speech being aired, the UK's Channel 4 sparked controversy when it aired a preview of a video that showed a deepfake — or a digitally altered figure — of the Queen, voiced by actor Debra Stephensen, according to The Guardian.

The video supposedly shows the fake version of the Queen discussing Prince Harry and Meghan Markle's departure from their official duties in the royal family, as well as Prince Andrew, the Duke of York's relationship with the disgraced financier and alleged sex offender Jeffrey Epstein.

Ian Katz, Channel 4's director of programmes, told The Guardian that the deepfake version of the Queen's Christmas address is meant to serve as a "powerful reminder that we can no longer trust our own eyes."

Related posts:
Latest News:
Who is Dancing On Ice professional Karina Manta?
Hollyoaks’ Nikki Sanderson teases tense family feud as Denise Welch joins soap
Armie Hammer’s ex, Courtney Vucekovich: ‘I wasn’t safe… He’s not well’
Who is Andy Buchanan and how was the Dancing On Ice pro injured by partner Rebekah Vardy?
Recent Posts
This website uses cookies to improve your user experience and to provide you with advertisements that are relevant to your interests. By continuing to browse the site you are agreeing to our use of cookies.Ok