It’s a shocking reality: on average, one woman a week in Australia is killed by their current or former partner. When a woman goes missing, there’s no doubt who police will investigate first. This was rammed home to Liane Moriarty as she listened to true-crime podcasts back-to-back during lockdown. 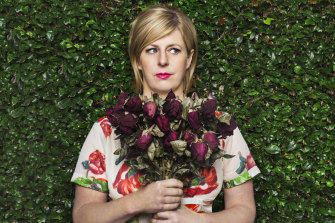 Walking is a great time for story ideas to percolate, says the 55-year-old best-selling author, and when she was given some new headphones she went on a deep-dive listening to true crime.

“Sadly there are multiple cases where a woman goes missing and the husband is the chief suspect in her murder,” she tells The Age and The Sydney Morning Herald. “He is invariably described as a loving father and that just got me thinking about how would I feel if my mother went missing and everyone was saying my father had possibly murdered her.”

Those real-life stories, consumed via true-crime podcasts, inspired her most recent novel, Apples Never Fall. It tells the story of Stan and Joy Delaney, who have been married for several decades, have four children and run a successful tennis school. Things are not as rosy for the couple as they seem to the outside world – both seem to be struggling in retirement – and then, out of the blue, Joy goes missing. Remarkably, for much of the time she was writing, Moriarty says she didn’t know if Stan was innocent or guilty.

Having made its debut last year at number one on The New York Times bestseller list, the book has been optioned by Heyday Television, with writer and producer Melanie Marnich (The OA, Big Love, The Affair) appointed as writer, showrunner and executive producer alongside Moriarty, Jillian Share and Albert Page. 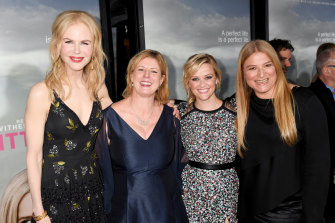 Nicole Kidman, Moriarty, Reese Witherspoon and producer Bruna Papandrea at the after party of HBO’s Big Little Lies in Hollywood in 2017.Credit:Jeff Kravitz/FilmMagic

It’s her fourth novel to be adapted, after Big Little Lies, The Hypnotist’s Love Story and Perfect Strangers. The Husband’s Secret, published in 2013, has been optioned by Sony Pictures with Kat Coiro reportedly directing.

So, what makes Moriarty’s books ripe for screen treatment? “With Big Little Lies, they were looking for a project they could do with multiple female characters, so that’s what appealed to Nicole Kidman and Reese Witherspoon,” Moriarty says. “My books are always written from multiple points of views and they have lots of little subplots, so that helps with television rather than movie adaptation.

“To be honest, what happened with Big Little Lies was they did such a great job of the adaptation, it inspired people to look at the other books. I was very lucky,” she says. “I’m so grateful the adaptations have brought me so many readers and I’ve never felt sidelined. But that’s still not the main game for me, it’s all about writing the book.”

Growing up, Moriarty wanted to be a writer but at a certain point, she “lost that dream”. It was her sister Jaci, also a writer, who encouraged her back to the keyboard. Another sister, Nicola, is a writer too. When they were little their dad commissioned all five siblings – four girls and one boy – to write stories: you got $1.50 if you filled an exercise book with words. 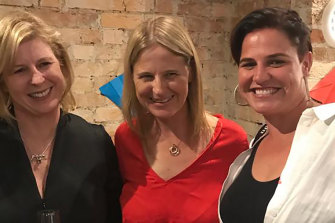 Liane, Jaci and Nicola Moriarty are all writers.

It was only after spending many years in the corporate world in advertising and marketing that she returned to that original ambition. Was she a better writer after going away and living a little? “I feel like I didn’t do anything interesting enough,” she says with a laugh. “I think that would be true if I’d lived a fascinating life. I always say that to budding authors – go and lead multiple lives and do interesting things, and then you’ll be able to write.”

As well as walking, Moriarty says great ideas come to her while driving. “It’s great to be doing something where you are moving – going for a walk or having a shower, where you think you’re doing one thing, but your mind is working away in the background.”

Remarkably, given how much is going on in her novels, she doesn’t map them out first – far from it. She won’t write down ideas for some time but if she keeps returning to it, that reveals it’s worth pursuing. “If I write it down, often when I go back to it, it’s not as good as I thought… if [an idea] keeps coming back to me and I want to know what happens, then hopefully the reader will too.

“I don’t plan my books and I get worried I might back myself into a corner.”

Even though she gets anxious ahead of book tours, she has been delighted to meet with readers again after the pandemic. Once she has done a few events, she says she finds her groove and then, towards the end, she starts to hate the sound of her own voice. “I feel like that person who has drunk too much at a dinner party and talks about themselves too much.”

It’s refreshing to know that even someone as successful as Moriarty still has moments when she’s all out of ideas. “There’s always a panicky, flailing about time in the beginning, which is the stage I’m at now, I don’t really have anything for the next novel,” she says. “I’m waiting for it to be revealed to me.”

The Booklist is a weekly newsletter for book lovers from books editor Jason Steger. Get it delivered every Friday.