Though fans of The Walking Dead might have thought that Daryl had made peace with the fact that Negan was now, for better or worse, one of them, their truce seemed to go out the window in the Season 11 premiere (recapped in full here). As the former adversaries went on a hellish food run, Daryl was downright hostile to Negan — even when the latter was making good points. 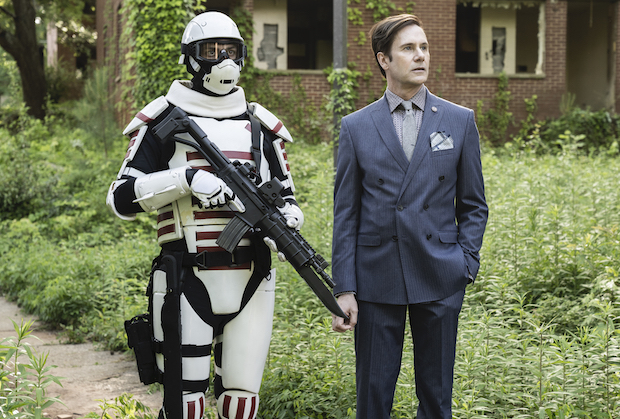 It’s not as big a tonal shift as it seemed to us, though, Norman Reedus tells TVLine. His character “doesn’t totally trust Negan, so he’s always got a side-eye on him.”

Daryl’s antagonism toward the Saviors’ former leader, he adds, isn’t a reaction to the return of Maggie, whose husband Negan murdered before all of their eyes. “Daryl’s watching her back, yeah. But as far as her and Negan, Daryl’s going to let them work out their beef for themselves.”

Should that prove impossible, well, all bets are off. “If it comes down to a fight,” Reedus says, “Daryl’s going to take Maggie’s side,” end of story.

Elsewhere in the episode, Carol risks her neck — and potentially those of her fellow scavengers — by hanging back in a warehouse full of groaning walkers to retrieve one last bunch of MREs. Yet another attempt on her part to make up for “killing” Daryl’s almost-girlfriend, Connie? “Nah, that’s just Carol being Carol,” says her portrayer, Melissa McBride. “She’s thinking, ’People are hungry, I’ve got to do this, and I’m Carol, so a lot of things I do create a lot of conflict. I’ll just take my chances.’”

Where the character actually might have hoped to win back some points with Daryl was when she was lifted out of the melee. “She brought Daryl his two knives that he threw down in there, and when she got to the top,” she notes with a laugh, “She was kinda ‘Like me now? Look what I got!’”