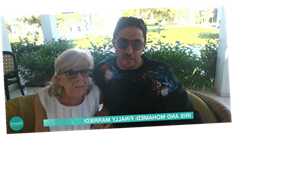 The outspoken gran, who recently tied the knot with her Egyptian boyfriend, appeared alongside Mohamed on This Morning on Thursday and spoke directly to the prime minister.

The 81 year old said: "We desperately need to get Mohamed to the UK so if Boris Johnson's listening, do your best and get the whip out and get Mohamed a visa for the UK.

"He would be an asset for the country, he's a qualified engineer and he would be good for the economy. He wouldn't be out of work, I'd make sure of that.

"He would be good, and that's all we want," Iris explained.

While speaking to Phillip Schofield and Holly Willoughby, Iris also spoke about her wedding day.

When asked about the non-traditional day, she said: "No, it's just an exchange of documents. We had to sign several documents with a signature and a thumb print, and then after that, the documents were handed over to us, one for Mohamed and one for me to say that we're married."

Iris revealed that the marriage documents are all in Arabic and she has no idea what is written down.

"It might say that I'm completely under his thumb. Well if that's the case, then I'm not," she sternly admitted.

To celebrate the special day, Iris and Mohamed, 35, went to KFC for some "chicken and chips and Coca Cola."

Mohamed confirmed the news of their marriage with Saudi Arabian news publication Al-watan.

He said: "I married her according to the Sunnah of God and His Messenger.

Iris rose to fame in January after she appeared on This Morning and shocked viewers with details of her steamy sex life with Mohamed.

Phil, 58, and Holly, 39, who recently divided opinion with a new Christmas makeover on This Morning, were left in fits of laughter as Iris said they had to use "a whole tube of KY jelly" on their first night together.