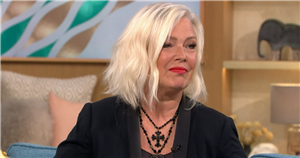 This Morning viewers have been left completely distracted over the stunning appearance of popular 1980s singer Kim Wilde as she oozed glamour on the show.

Kim joined Ruth Langsford and Eamonn Holmes to celebrate 40 years since the release of Kids In America in 1981 which the beauty released when she was 20-years-old.

Appearing on the popular ITV daytime show, viewers were gobsmacked as Kim looked nothing short of glamorous as she spoke with the hosts about her music career.

However, fans were immediately distracted by her stunning looks as she rocked a glamorous red lippy and a stunning blonde bob.

The beauty had opted for a two-piece necklace and an all black outfit with a pair of trainers as she finished the look with a black blazer.

Viewers were quick to compliment the singer, with one user writing on Twitter: "Kim Wilde is looking good."

Meanwhile, another user wrote: "Kim is looking amazing at 60!"

A third user wrote: "It's great to see the gorgeous Kim Wilde on This Morning today."

The 60-year-old singer was praised by Ruth for keeping hold of her iconic red lipstick look and Kim made it clear that it's not something that is going anywhere anytime soon.

She said: "Red lipstick helps! If you're ever not sure about life, put some red lipstick on."

Fans praised her for her sassy attitude as she donned the stunning lippy and celebrated herself and her career on the show.

Kim appeared on the show to discuss her music career and revealed her brand new greatest hits album which is released today.

Her Pop Don't Stop album has been released as a nod to her former album as she renewed it with her highest flying tracks after 40 years of Kids In America.

Kim announced the album in May this year and has today marked the release of it with a double CD standard and a 5xCD and double DVD collectors edition available.

This Morning returns tomorrow on ITV at 10am.