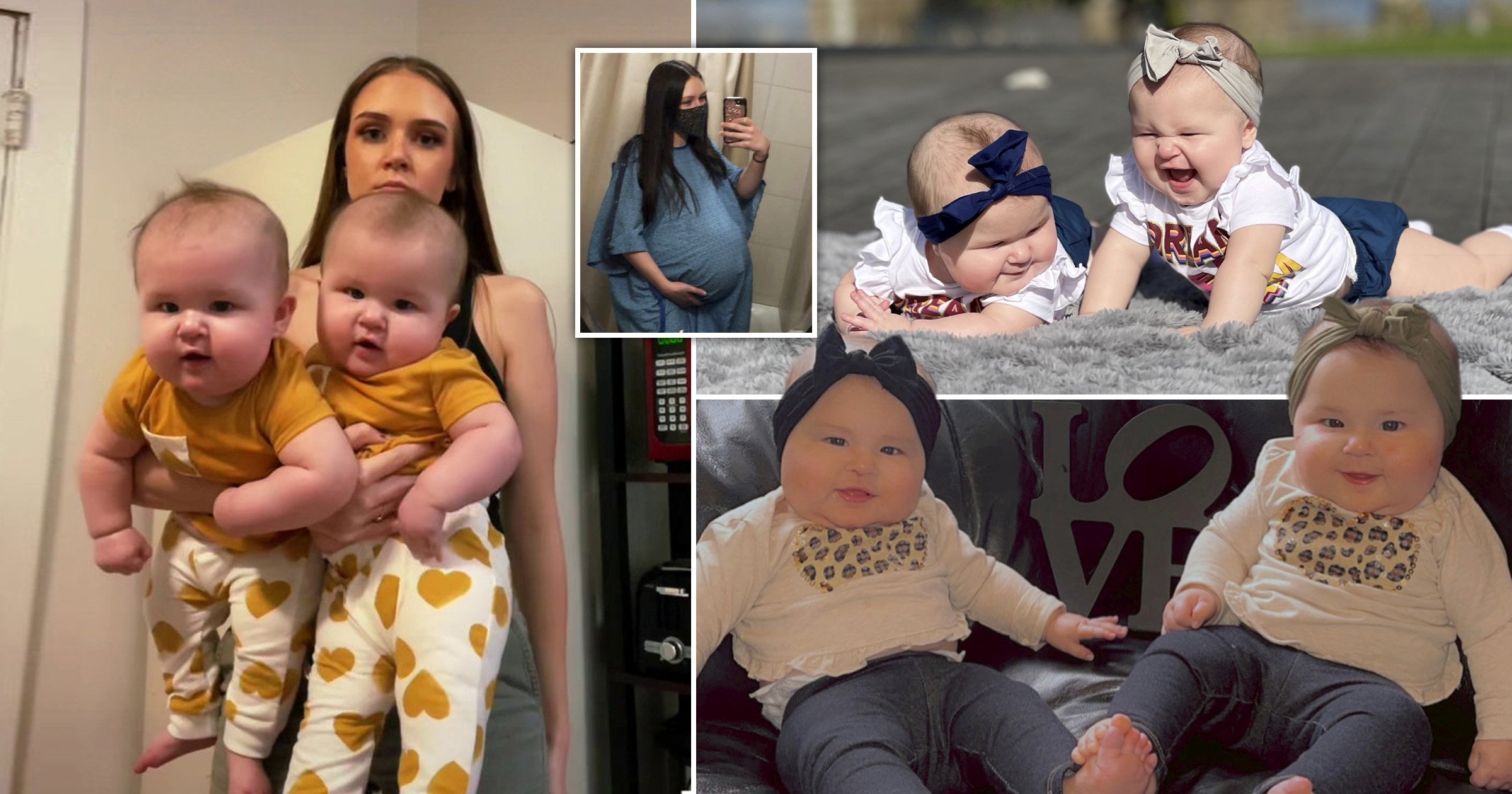 A young mum has shocked followers on TikTok with her enormous seven-month-old twins – who have already tripled their birth weight.

Alexis LaRue, 22, can’t believe how fast her twin girls, Camila and Elena, are growing – they weigh a huge 21lbs each.

The mum had to post a video of her weighing and measuring her babies to prove that they really are as big as they look and that she’s not editing her videos.

She says the response she has received has been overwhelming.

One video of her with her holding her twins has amassed more than 46 million views.

‘It’s funny because when I posted that video, I didn’t think much of it,’ says Alexis, who’s from Minnesota, US.

‘I actually didn’t think my babies were that big until I started reading all of the comments.’

She gave birth to her baby girls in March, with Camila arriving at 9.52am weighing 6lbs 6oz, and Elena one minute later at 6lbs 7oz.

Now, at nearly seven months old, they have already tripled their birth weight at almost 21lbs each.

‘They just really seem to enjoy trying new foods,’ says Alexis. ‘Whenever I am eating something, they always stare at me as if they’re waiting for me to give them some.’

Alexis was 21 when she found out she was pregnant with fiancé Leo Mejia, 23, and was overjoyed.

‘My one goal in life was to be a mum, so I was incredibly excited it was coming true.’ she says.

‘I was only six weeks along when I had my first ultrasound and we saw two little sacs on the screen.

‘Not having any twins in our families, I was completely shocked, but I was also so excited.’

The stay-at-home mum adds: ‘In the twin community, it’s pretty normal to expect babies around 5lbs or less.

‘I had already bought preemie-sized clothes for the twins, as I thought they were going to be very small. However, with the combined weight of almost 13lbs, the girls went straight into new born and have been growing very rapidly since.’

Camila and Elena are eating 6oz of baby formula every couple of hours, and have just started moving on to solids.

‘They are both at the top of the percentiles for weight and height,’ says Alexis.

‘I do find myself having to buy them new clothes quite frequently – they are very fast growers.

‘At seven months, they can wear anything from 12 month to 18 month clothing.’

As soon as the twins were born, Alexis started making videos with them for her TikTok account, @themejiafamily_ while she was bored at home. But the couple never imagined the attention the videos would bring.

‘Those are eight year olds,’ commented one disbelieving viewer.

‘If they were standing on top of each other they would be taller than you,’ said another.

There are also some accusations that Alexis edits her videos or uses a filter to make the girls look larger, but she says this is not true.

‘I can say, the angle of some of the videos does slightly exaggerate their size,’ she says.

‘I actually posted a video not too long ago weighing and measuring the babies so people could get an idea of how big they actually are.

‘I do also get a lot of accusations of over-feeding them, however, it is very difficult to overfeed a baby.

‘Their paediatrician has not had any concerns about their sizes, they are simply very fast growers.’

‘If there is one thing I would like everyone to know, it is to remember that all babies are different.

‘They all grow at a different pace, mine just happen to be growing very quickly. They are very healthy, happy, and full of personality.’