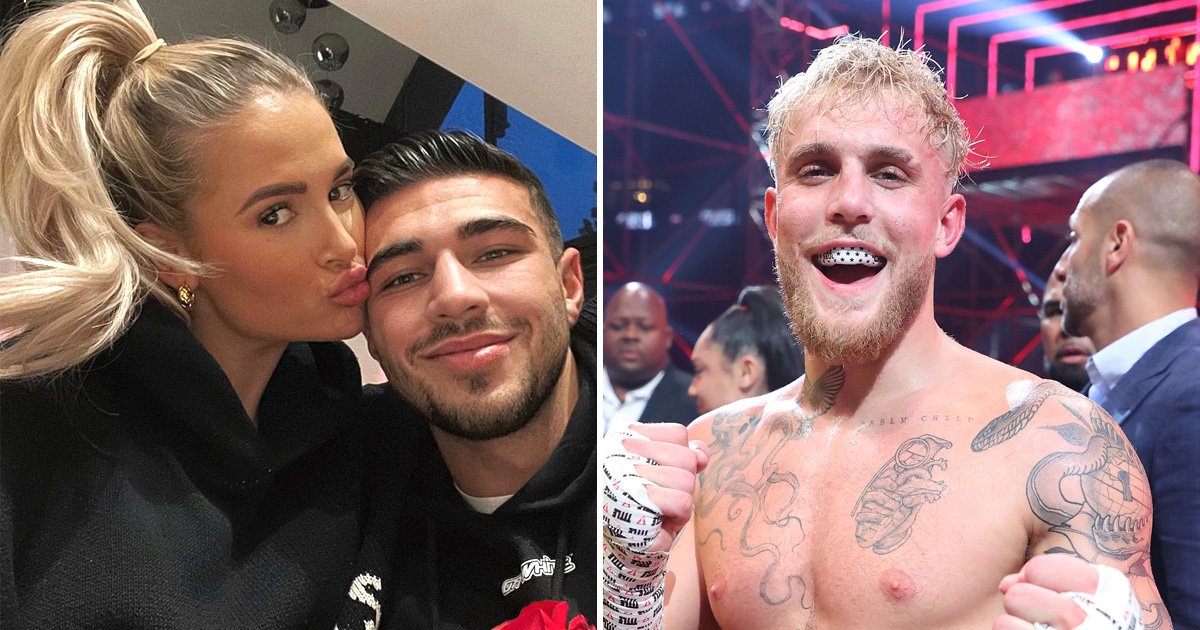 Tommy Fury has threatened to ‘break every bone in Jake Paul’s face’ after the YouTuber turned boxer dragged Molly-Mae Hague into their feud.

It was strange enough when Jake, 24, embarked on a feud with British YouTuber KSI that ended up in the ring, but now he and Tommy, 22, are beefing, laying down the groundwork for an expected bout between the two stars.

And there’s already fighting talk from Tommy, who is furious by name, furious by nature about Jake bringing his girlfriend into the row.

Earlier this year, Jake shared a screenshot of an alleged DM from Molly-Mae sent in October 2018, which read: ‘Might be coming to America later this year and have always been a fan of your videos. Maybe you can show me around?’

Molly-Mae, 22, denied that the message was real, tweeting in May: ‘Times must be hard when you’re having to fake a DM…. Photoshop is scary.’

Love Island star Tommy called out Jake while speaking to Sky Sports and mocked Jake for ‘playing games on the internet’.

The light-heavyweight said: ‘I’m very thick-skinned, I’m a true professional. I’m a professional athlete, and that’s something these boys ain’t. These boys play games on the internet and run around for a living.

‘I train and fight hard for a living. I’m not bringing anyone’s missus into this, I’m not doing anything like that because I’m a true professional. I will let my fists do the talking. For every bad thing they’ve said, believe me, they’re going to get  a swift right hand for it.

‘I’m going to break every single bone in his face, because you don’t bring people’s loved ones and missuses and all their partners into it. It’s a fight. They’ve got nothing to do with it, leave them out of it, and me and you, let’s fight.’

Tommy – the younger brother of heavyweight champion Tyson Fury – is flying to the States this month to fight on the same night as Jake, after landing a spot on the undercard at the event in Cleveland, Ohio.

Jake, who is 3-0 in his career, will take on Tyron Woodley, 39, after the ex-UFC champion was considered to be a bigger name Stateside than Tommy, who had reportedly been in the running.

However, Tommy – who is 6-0 in his career – will fight Jake’s sparring partner and MMA fighter Anthony Taylor, 32, and after signing a two-fight deal with Showtime, a pay-per-view clash between Tommy and Jake could be on the cards should they both win on August 29.

Addressing speculation that his addition to the undercard is preparation for a fight against Jake, Tommy said: ‘I would assume so. They’ve not put me on the undercard for the good of my health, have they. They are doing it to try and build the fight. That’s all well and good. I’m here, I want the fight. I will take the fight in a heartbeat, that’s not a problem.

‘That’s all on [Jake’s] shoulders. I’m gonna go over there and do what I do best, impress and box, and hopefully get the knockout win, and the rest of the ball is in his court. It always has been, he’s the one who controls everything.’

The reality star confirmed his participation in the event on Instagram, writing: ‘USA BOUND🇺🇸 To confirm the rumours…. I will be fighting on AUGUST 29th in Cleveland, Ohio. I can’t wait to put on a show in America…. bring it on.’

Molly-Mae, who is currently working in Santorini in Greece, commented: ‘Let’s go baby.’

Tommy and Molly-Mae have been together since they met in the Love Island villa in 2019, with the pair coming second to winners Amber Gill and Greg O’Shea in the final.