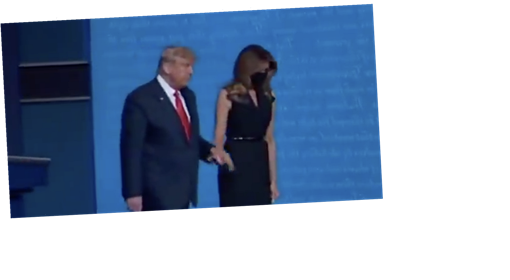 Last night saw the final presidential debate between Donald Trump and Joe Biden, and aside from Trump's "onslaught of lies" during the event, conversation has turned to someone who wasn't debating at all: Melania Trump.

After the debate concluded, the First Lady was seen on camera appearing to pull her hand away from her husband's as they exited the stage together.

While Melania has been seen doing this enough times to make a supercut montage out of all the clips, a few seconds caught on camera don't say all that much about someone's relationship, and at the end of the day, the First Lady is still complicit in an administration that separated 545 migrant children from their parents.

Still, that didn't stop the footage from going viral as Twitter tried to decode the Trumps' body language.

Earlier this month, before Donald and Melania Trump both tested positive for the coronavirus, the First Lady was embroiled in some controversy when recordings obtained by the First Lady’s former friend and aide Stephanie Winston Wolkoff were released, revealing her apparent thoughts on her Christmas duties at the White House.

"They say I'm complicit. I'm the same like him, I support him. I don't say enough I don't do enough where I am," Trump told Wolkoff in a recording made in 2018. "I’m working my ass off at Christmas stuff. You know, who gives a fuck about Christmas stuff and decoration? But I need to do it, right?"

"OK, and then I do it and I say that I'm working on Christmas and planning for the Christmas and they said, 'Oh, what about the children that they were separated?'" she continued. "Give me a fucking break. Where they were saying anything when Obama did that? I can not go, I was trying to get the kid reunited with the mom. I didn't have a chance — needs to go through the process and through the law."