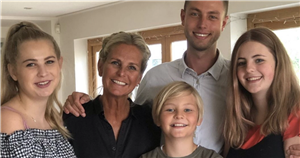 Ulrika Jonsson has revealed she is considering whether to open an account on content sharing platform OnlyFans just to “p**s” off her four children.

Ulrika Jonsson has revealed she is considering whether to open an account on content sharing platform OnlyFans just to “p**s” off her four children.The star, who is currently starring on Celebs Go Dating, opened up about the subject on industry friend and fellow TV personality Kate Thornton’s White Wine Question Time podcast.

“I’m contemplating an Only Fans account just to p**s them off,” she teased. “I go, 'I strip so you can eat!’

Ulrika went on to explain that her children already “cringe” over their mum’s confidence to share naked pictures of her body.

But she insisted they have to “acknowledge” that “this is what I do”.

She also laughed that despite their complaints her children love the rewards of her money-making photos and campaigns so they have to accept it.

“When I can arrange something special for them because I might know someone [they do]. So, you know, shut up, really!” the 90s Gladiators icon teased, adding that her daughter Bo is probably the most encouraging.

“Bo is generally quite supportive actually. She goes, 'Very proud of you, mamma!’” Ulrika reflected. “I don't know if it's just a gratuitous throw-away thing, but it's lovely to hear.”

It comes as Ulrika recently opened up on getting a call from a safeguarding officer at her teenage son Malcolm’s school.

The person rang after looking through her social media, which showed the star reflecting on a funny night out that ended with having two “strange men” in her house she “didn’t know”.

The blonde beauty had posted a number of snaps to her Instagram Stories, as she revealed she’d had a wild night on the town.

“About last night: Went to a bar. Met a wicked group of girls,” she wrote on Sunday 7 November. “Fell on my a**e THREE times. Got chucked out (yes, me) Lost my handbag.

“Found it. Got a MACCIES on way home. Am dying RN. (There are two men sleeping in my house. Dunno who they are).”

Ulrika claimed she had been accused of putting her child in danger after she let two men stay the night – even though they were her daughter’s friends.

Ranting in her column for The Sun, the presenter claimed it was “sexism” that she’d been contacted.

“Had I been a dad bringing two women back to my home, would I have received a phone call? Methinks not,” the mum-of-four claimed.

“To suggest that, as a woman, I couldn’t have ‘strange’ men to my house because I need to protect myself — rather than us continuing to implore men to learn to behave appropriately around women — is sexism,” she added.

For all your latest updates on Ulrika Jonsson, sign up to OK!'s daily newsletter.