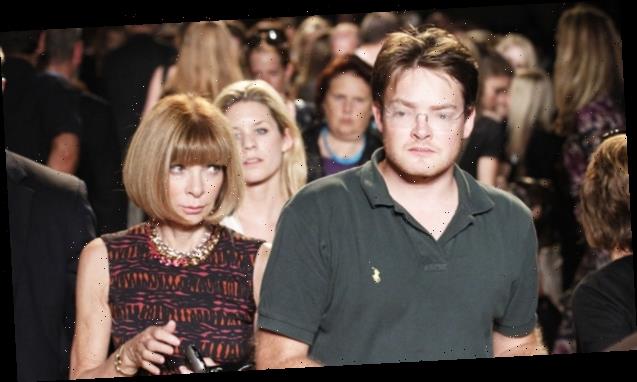 Anna Wintour revealed in an emotional video that she is ‘so proud’ of her son, Charlie, and the work he is doing on the front lines of the COVID-19 outbreak.

Vogue editor Anna Wintour‘s family has been hit hard by the coronavirus. In a video the Vogue Instagram account shared on April 6, Wintour, 70, wearing a blue and white striped sweater and her signature sunglasses, broke the news to loyal readers and subscribers. The revered editor-in-chief detailed a new fund she and designer Tom Ford had set in place in order to help those in the fashion industry struggling to “make their payroll” or those who “have had their orders returned, stores closed, who fear that their businesses and their livelihoods may not survive what we’re going through.” At one point in the video, however, Wintour became noticeably choked-up.

During her rehearsed speech, Wintour’s voice became shaky when she spoke of her 35-year-old son, Charles Shaffer, a doctor in a New York ICU. “My son is a doctor,” Wintour shared. “He is currently quite ill and self-quarantining at home.” As Wintour’s fingers began to fidget and her voice cracked, the Vogue editor revealed that, “when he is able, he will return to the ICU at his hospital.” After she collected her emotions and took a deep breath, Wintour shared with all watching the video, “I am so proud of him, and so grateful to all the health workers, first responders, nurses and doctors who are fighting to reduce the spread of the virus and to save lives.”

Aside from her own personal story, as well as how she is using her resources to aid American designers during the COVID-19 outbreak, Wintour has been a vocal critic of how President Donald Trump has handled the coronavirus pandemic. In an op-ed the editor-in-chief and Condé Nast artistic director published with Vogue on March 16, she described Trump’s response as “shocking” considering the unprecedented effects the virus has had on the country. “I, like so many of us, have been appalled by how he has responded to the pandemic — the optimistic and fact-free assurances that all will be fine, the chaotic implementation of travel bans and claims about a ‘foreign virus,’ the narcissistic ease with which he has passed blame to others, his dishonesty with the American people, and worst of all, his shocking lack of empathy and compassion for those who are suffering and fearful,” Wintour wrote.

“Tom [Ford] and I are not doctors, but there is so much help that is needed, especially as small businesses and workers around this country suffer devastating economic consequences,” Anna Wintour says, adding: “The fashion industry has been hit hard. I have been speaking to so many American designers and others in the community who fear that they won’t make their payroll or have had their orders returned, stores closed, who fear that their businesses and their livelihoods may not survive what we’re going through. The fund we’ve created is intended to help them and the talented people they work with.” Tap the link in our bio to learn more about the #CVFFACommonThread fund and to donate if you can.

As of April 7, the United States has confirmed over 374,000 positive cases of coronavirus. The tragic death toll has already reached over 12,000, according to the Centers for Disease Control and Prevention. In New York state alone, there are roughly 141,100 confirmed cases, and New York City is widely considered the epicenter of the outbreak in the United States.