We Still Can't Stop Thinking About Palm Springs, So We Got Some Answers to Our Questions

Happy November 9th! Palm Springs is still an obsession, so let's revisit the answers to our burning questions about the Hulu hit. 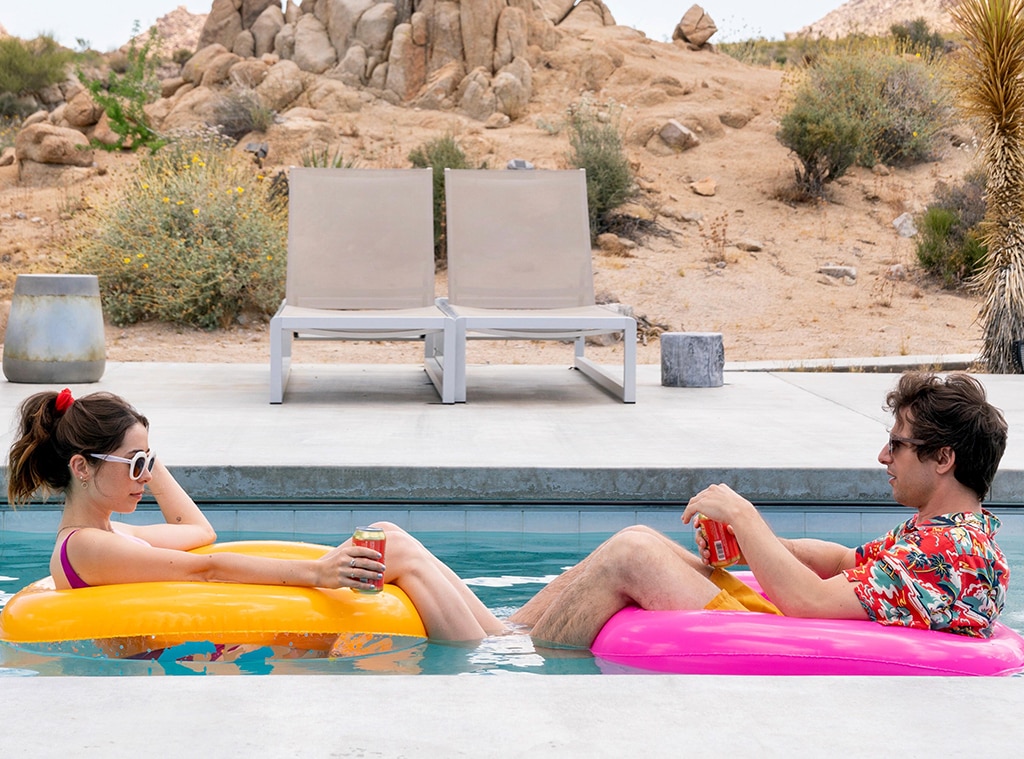 It's been months since Hulu released the movie Palm Springs, and we're obviously still thinking about it—especially today, because it's Nov. 9, which is the day Tala (Camila Mendes) and Abe (Tyler Hoechlin) are supposed to get married and the day that Nyles (Andy Samberg) and Sarah (Cristin Milioti) cannot seem to escape.

Right in the middle of the global time loop we all seem to have found ourselves in thanks to a massive pandemic, The Lonely Island gifted us with a movie about two wedding guests stuck in a time loop with no clear way out. No one could have known what would happen when they were making the movie, and even in January, when Hulu and Neon bought the movie in the highest sale ever at Sundance (by a purposefully hilarious 69 cents), they could not have predicted that movie theaters would soon shut down. Streaming, alongside a stint in drive-in theaters, became the only option. But it all ended up working out perfectly.

"This pandemic combined with the rush of bringing it out to the world has definitely blurred time, but it's just been super gratifying to see people engage with [the movie] in such a thoughtful and passionate way," director Max Barbakow tells E! News. "We wanted to give people an opportunity to just laugh and think and feel with the movie, and it's just resonating in a deeper way right now and people are getting that. And I will say, it's just nice to see that it's playing and being experienced in the way that we intended with everything that we put into it."

Upon its release, Palm Springs immediately broke all of Hulu's original movie records, becoming the highest viewed movie on the platform its opening weekend. But it might have also broken our brains.

While Nyles has pretty much resigned himself to being stuck in the loop, Sarah spends pretty much the whole movie desperately trying to get out. She eventually learns a whole lot of physics and figures out a slightly terrifying plan, and she and Nyles do end up at least getting out of that particular Nov. 9. But do they truly make it to Nov. 10? That's just one of the questions we haven't been able to get out of our heads for the past three weeks as we've thought about, talked about, and even tried to emulate this perfect summer 2020 movie.

We got Barbakow to answer some of our biggest burning questions about the movie, and while he had a few answers, he also gave us more questions to ask, including a question for us to ask about ourselves: Why are we so obsessed with whether and how Nyles and Sarah got out of the time loop when the point is that wherever they are, they're there together?

There's probably some sort of metaphor in there related to what's happening in the world right now, but even if there is, let's face it—we will never stop being obsessed with getting out of the loop.

So without further ado, here are director Max Barbakow's answers to our many burning questions about the movie Palm Springs.

The Story of How Nick and Vanessa Lachey Fell in Love

There's not an exact answer, but Barbakow says "between 40 years and 40 million years." Long enough for Nyles to forget what his job was.

For both Nyles and Sarah, Barbakow says they "probably never calculated it, exactly" and left it up to interpretation, but "it's a very, very long time."

Very, very good. Barbakow says she was stuck in the loop long enough to get "the equivalent of two PHDs in physics and quantum theory."

Pretty real! While time loops aren't real (yet…or are they?), all of the science is based on real science. Physicist Clifford V. Johnson, who also consults on Marvel movies, served as consultant on the movie and played himself in a cameo as Sarah video chatted with him.

"He advised us on what it would take to explain a time loop if it were real, and what elements would be needed to support that science. We were lucky in that, in his mind, there are some physical events in the universe that could cause a rupture in the space-time continuum, that would be represented in this world by something like an earthquake or a cave opening, which we already had written in the script."

Once again, it's up for interpretation. It appears that Nyles and Sarah made it to November 10 and got out of the loop, but the ending could be read in multiple ways. But either way, Barbakow says that what matters is that they're together, and he agrees they "got outta something."

"It depends on what you think happened, if they got out or if they didn't get out, if they're alive, if they're in a different version of the multiverse," Barbakow says. "I would definitely say they stayed together, and that's the most important part. At that moment, they're making a choice when they walk in the cave to take the plunge and be together regardless of what happens. But right then, I would say they stay in the pool even as the family yells at them…if there were, like, a volleyball net, they could set up a game of volleyball or something."

Sarah used a goat in her experiment. After she blew the goat up inside the cave, she says the goat didn't return to the loop. But then at the end, Nyles was still in Roy's loop. What really happened to the goat?

"The goat maybe didn't disappear. It might be loose out in the desert," Barbakow says. "But I will say that element there plays into the resolution of whether they got out or not.

We last saw Roy (J.K. Simmons) joyfully discovering that Nyles and Sarah had escaped the loop, and he said Sarah left him instructions on what to do. So did he use them?

"I think he probably slept on it, maybe saw he felt the next day in Irvine, whether that was a good day. He says it's always a good day there, so it's kind of about weighing whether he wants to see his kids grow up, or if he wants to lean into the peace that he's found."

"The dinosaurs in the campfire scene are definitely real," Barbakow says. We have never once seen them in Palm Springs, but to be fair, we didn't know to look for them.

Barbakow says we'd have to ask June Squibb, but he says she's definitely being cagey on purpose about having been to many weddings. We are currently awaiting comment from June Squibb.

If we were stuck in a time loop, Groundhog Day would be our very first reference. While Sarah thinks the trick to getting out is to learn to be selfless, as Bill Murray does in Groundhog Day, no one ever actually says the name of the movie. Barbakow says the movie definitely exists in this world, but the filmmakers were careful not to reference other movies on purpose.

"I think Groundhog Day [exists], I think Edge of Tomorrow does…it was just kind of a choice not to mention any specific pop culture that could potentially take us out of that universe. You want it to always feel kind of timeless in that sense."

"Shukran" is the Arabic word for gratitude, and both Gary and Nana use it throughout the movie. Gary is from Sudan, and he's been adopted into the family by Nana, who also speaks the language.

"There was a moment that was cut out of the movie that explained that relationship," Barbakow says.

Yes! Akupara is a brand of beer that was invented for the movie. In Sanskrit, the word means "unlimited, unbounded" and in Hinduism, it's the name of a tortoise described as "one who is without death."

"If you look close on that label, there's a graphic that kind of explains the mythology of the world and the earthquake," Barbakow says, recommending a google of Akupara that will take you down a "nice little wormhole, no pun intended, that explains some of the metaphysics behind the movie."

He credits production designer Jason Kisvarday with creating the look of the beer.

If you've ever spent a weekend at a house in Palm Springs, floating in the pool for three days straight surrounded by palm trees and old Hollywood paradise vibes, you might understand how the whole place feels like time has stopped. (And if you haven't, you should.)

"The movie is based on my experience at [screenwriter Andy Siara]'s wedding in Palm Springs," Barbakov says. "We had both been going out there for weddings throughout our ‘20s, and as Southern California boys, it's always the first destination when you want to get out of town, go on vacation, party a little bit, get lost in the desert, feel the magic of the earth. It just felt right."

A version of this story was originally published on Aug. 4.