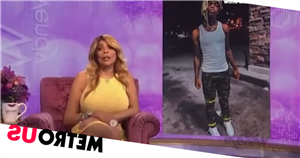 Wendy Williams has been slammed for the way in which she announced the death of TikTok star Swavy on her show.

The internet star – real name Matima Miller – was killed aged 19 in a ‘senseless act of gun violence,’ his family said.

He was shot and taken to hospital on Monday, according to police in the US state of Delaware.

Williams addressed the tragedy on her show, but began the segment by joking about Miller’s millions of followers.

She began by saying to her audience: ‘I have no idea who this person is, neither does one person in this building.’

Williams was then told she has more followers on Instagram.

‘Well, as my son Kevin would say – no one uses Instagram anymore. And, as far as TikTok, I don’t use that. I don’t know what it is, I don’t wanna be involved,’ she joked.

‘However, the family is working diligently to get justice for Swavy. This is just the beginning, we will forever keep his name alive and continue his legacy! The impact he had on others remains unmatched 💯.’

Tributes have poured in for the late star, with a fundraiser also being set up to cover his funeral costs.

Metro.co.uk has contacted reps for Wendy Williams for comment.