We’re going to have to open up eventually, so it’s time for a plan

Early last year, when it became clear a mysterious new virus in China would spread to every corner of the globe, most nations were quick to put up walls. In the week after the World Health Organisation declared a pandemic, scores of countries either completely or partially closed their borders.

Australia joined the rush, slamming the door shut from 9pm on March 20, with exemptions only for citizens, permanent residents and their immediate families. While the move stunned many – Prime Minister Scott Morrison gave one day’s notice – there was little protest. Combined with the hotel quarantine program, which started a week after the borders were shut, closed borders have been the main reason Australia has stayed relatively free from COVID-19. 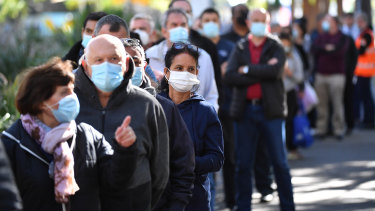 People waiting to get vaccinated, a major step in getting borders reopened. Credit:Sam Mooy

As the federal budget made clear last week, the government is not planning a reversal any time soon. “Inbound and outbound international travel is expected to remain low through to mid-2022,” it said. For a government that had often criticised the states for shutting their borders, the projected delay in opening up Australia was surprising.

While it was reported this week that most Australians support the border restrictions, the debate has nonetheless intensified. If vaccinating a critical mass of people is not a trigger to opening our borders, then what is?

Given that most low and middle-income nations are not expected to get widespread access to a vaccine until 2023, it will be a long wait before the world contains the coronavirus. In any event, fully eradicating COVID-19 will be near impossible. Despite the best efforts of global health campaigns, the only infectious disease that has been entirely eradicated is smallpox. All other deadly viruses are contained to various degrees, but it’s an ongoing battle.

COVID-19 will most likely join that group, which means, once the borders are reopened, it will exist at some level in Australia for the foreseeable future. After having expended so many resources keeping it at bay, this is a notion many may find hard to accept.

Dr Nick Coatsworth, former federal deputy chief medical officer, recently asserted this when he spoke about the “false idol of eradication” and that “we need to come to terms with the idea that we cannot, nor do we need to, ride this one out in an eliminationist bunker”.

This was echoed by Victorian Chief Health Officer Brett Sutton when he told healthcare workers in a private seminar that the country would reach a critical juncture where it must abandon its fortress Australia approach to COVID-19 and “make a call on letting it run” once vaccinations have been widely offered.

Mr Morrison has other ideas. He said at the weekend that the country could not use vaccinations alone as a reason to reopen borders: “Australians, I don’t think, would welcome the incursion of the virus into the country.” Asked if he would only open the borders when the entire world was vaccinated, the Prime Minister declared it a “moving situation” because “we can’t control what is happening in the rest of the world”.

That is true, Mr Morrison, but surely you can control how Australia prepares for a world in which we learn to live with COVID-19 – as we do with other viruses.

That means generating far greater urgency for people, when they can, to get vaccinated. That means supporting a wider range of quarantine options beyond the expensive and ill-equipped hotels that are the backbone of today’s program. That means ensuring Australia has access to enough COVID-19 vaccine, and booster doses if required.

Continuing to put up the shutters against the world may win you favour, but it is not the best outcome for our economy or our society, and it denies the reality of what lies ahead of us.

Note from the Editor

The Age’s editor Gay Alcorn writes an exclusive newsletter for subscribers on the week’s most important stories and issues. Sign up here to receive it every Friday.