What We Know About Madonna’s New Concert Documentary

You know Madonna. Aside from being considered the “Queen of Pop,” she is also known for being the “Queen of Reinvention.” After all, she has enjoyed a successful career that is still going strong after 30 years. Her latest studio album, “Madame X,” was released in 2019 and saw the powerhouse icon embody different personas and characters. As seen in the trailer for the album, Madonna explained that Madame X was a woman with many sides to her. The LP cemented the “Like a Prayer” hitmakers legendary status and topped the US Billboard 200.

To promote “Madame X,” Madonna embarked on a world tour of the same name that saw her perform in a more intimate setting than she’s used to. In a 2019 interview with BBC, the singer explained why she opted for a different setting for this tour. “I’ve done so many shows — world tours, stadiums, sports arenas, you name it — that I feel like I have to reinvent that now too,” she said. “I like doing intimate shows and being able to talk directly to the audience.” That same year, Billboard named Madonna’s tour one of the best of 2019.

As noted by Pollstar, the “Madame X” tour grossed $51.4 million at the box office after performing 75 concerts in Europe and the US. While on the road, the Grammy Award winner also filmed a documentary for fans to watch. Keep reading to find out more. 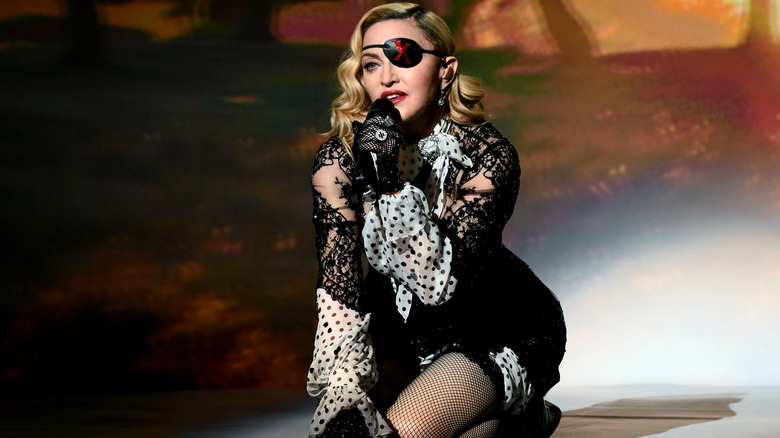 According to Pitchfork, fans will be able to stream Madonna’s upcoming documentary, “Madame X,” on October 8 via Paramount+ in most countries. MTV is set to debut the film in other territories. As noted by Music News, the concert film was captured during her six-night residency in Lisbon, Portugal, in January of 2020. The city has played a big part during the “Madame X” era, as Madonna recorded part of the album there.

The concert film, which was directed by Ricardo Gomes, is scheduled to feature 48 onstage performers, Madonna’s children, musicians, and dancers from around the world. “Sharing my vision with global audiences has been profoundly meaningful to me,” Madonna said in a press release. “The opportunity to bring its message and the incandescent artistry of all involved to an even wider audience comes at a time when music is so deeply needed to remind us of the sacred bond of our shared humanity.”

“Madonna is undoubtedly the world’s biggest superstar, never ceasing to push boundaries and shape the pop culture landscape,” Bruce Gillmer, the chief content officer of music at Paramount+, said. “She and MTV together have an incredibly storied history and we are thrilled to continue to amplify our partnership globally with the exclusive world premiere of Madame X streaming on Paramount+ this October.” We can’t wait to watch!