What’s wrong with the ABC’s once-mighty Q+A, and how to fix it

If the question is what’s wrong with the ABC’s once-mighty Q+A, it seems everyone has an answer.

The sense that the program is tired (the tweak from Q&A to Q+A is one of several designed to “freshen” a show that is now 13 years old) and in crisis has been simmering for several years. In May 2018, advertising and media publication b&t claimed it was “fast losing both its influence and its viewers” after it pulled a metro city audience of 383,000 viewers. By December 2019, that number had dropped to 293,000. In April this year, in its new Thursday-night slot, it dropped to 224,000, before bouncing back this week to a more respectable 321,000. 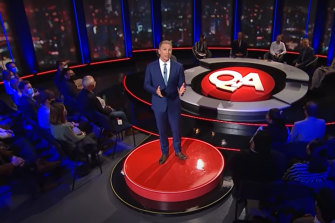 With Hamish Macdonald leaving the show, where to now for Q+A?Credit:ABC

But the departure this week of Hamish Macdonald, who replaced original host Tony Jones at the beginning of 2020, has put Q+A uncomfortably back in the spotlight. Right or wrong, the perception is the show is no longer up to its stated mission of holding our politicians to account.

Some have laid the blame at the feet of Macdonald, who is returning to his old stomping ground of The Project on Ten. He was too soft on Coalition ministers, or alternatively he was too hard, often talking over them or cutting them off. He is too left wing, unless you’re in the camp that thinks he’s too far to the right.

“That tells me that everyone brings their own opinions and points of view, and that’s to be expected,” says Erin Vincent, executive producer of the show since late 2019. “The whole point of Q+A is to bring viewers a range of perspectives and ideas – views that challenge their own, as well as ones they might support. That isn’t always comfortable, but it’s important.”

But one insider, who spoke on the condition of anonymity, says the problem isn’t too many politicians but too few. “It’s a program about holding power to account. It’s not just a program about ideas,” they say. “Unless you’re actually offering something different and distinctive – which it was – it’s just an upmarket version of The Drum. People say they prefer the show without politicians, but unless you’re delivering that what is its point of difference. You really want someone who has power to make decisions on, so you can ask ‘what would you do about it?’”

Dr Alex Wake, program manager for journalism at RMIT, used to set her students the task of watching the show as part of their course work, and regularly organised tweeting sessions in the early days. Now, “I hate to say it, but it’s become tired”.

Part of the issue is Twitter itself. Once so promising as a platform for political engagement, it has now “become a vile place”, says Dr Wake. At the same time, the show itself has become more timid.

“They’ve tried to tone down the controversy,” she says. “It used to be they’d have on talent that was set up to create very strong conflict, to make good television. They’d come on and be quite happy to spar, and saw that as their role. Now we don’t have a Cardinal Pell up against a Richard Dawkins any more. It takes some of the heat out of it.”

That’s no accident, says the insider, who argues the move in reporting lines from the Television division to News in the wake of the Zaky Mallah affair in 2015 was an attempt to mollify the government, and has had an ongoing impact on the show’s willingness to run risks. That may be politically and managerially astute, but it doesn’t necessarily produce great content.

The move to Thursdays and an earlier timeslot hasn’t helped. As Dr Wake observes, “that’s sports training time for anyone with kids”. It’s also the case that Thursday nights draw lower audiences across the board, meaning Q+A was always likely to suffer a dip, though the hope was that it would pull a larger share of a smaller audience in the new slot.

But the ABC claims it is happy with the numbers. According to a spokesperson, the show’s national average audience for 2021 (including regional viewers) is 455,000, plus 13,000 on iview. “We’re committed to Thursday nights,” insists Vincent. “It takes time to bed in timeslot changes, and the audience trend [in recent weeks] is positive.”

At any rate, the broadcaster suddenly finds itself with an opportunity to tinker. For now, it claims to be committed to the rotating hosts approach, but the idea of a female-fronted Q+A must surely hold appeal. Virginia Trioli, a regular guest host would be a good permanent choice if not for the logistical challenge of also hosting a morning radio show. Patricia Karvelas and Leigh Sales are also strong contenders for the role. 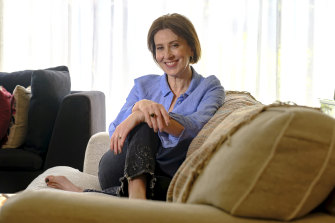 But as the show’s creator and founding executive producer Peter McEvoy said last year, “when Q&A is doing its job, the personnel don’t matter. They’re just there to spread the net wide.”

It is worth bearing in mind too that the past 18 months have produced the most difficult set of circumstances the show has ever confronted, with live audiences largely banished, and guests frequently restricted to video appearances because of the pandemic, which has also dominated discussion.

“Once COVID robbed the show of part its raison d’etre – the live audience that gave it its energy and purpose – it was doomed and evidently has never recovered,” observes Neil McMahon, who regularly covered the show for this masthead for years and judges as “pretty dire” last year’s shows without an audience. “Throw in change of host, executive producer, timeslot and the streaming competition and it was a perfect storm. I’m not sure any program could survive it.”

Assuming we ever get past this pandemic, we might again have a broader range of topics for discussion than lockdowns and vaccines. Guests might again be able to fly interstate with ease. And a live audience armed with questions can once more be part of the show.

If that all comes to pass, Q+A might get an immediate fillip, regardless of what night it’s on or who is in the chair.