Which Fellow Rapper Did Travis Scott Reportedly Get Into A Public Fight With?

2021 has seemingly gone Travis Scott’s way so far. The rapper added the prestigious mantle of “award-winning philanthropist” to his multi-hyphenate, receiving a Red Carpet Advocacy (RAD) Award for his Cactus Jack Foundation’s distribution of 50,000 free meals in his hometown of Houston during February’s ice storm. His foundation also partnered up with The New School’s Parsons School of Design to bring Houston “an authentic fashion design program” in November 2020, reported Vogue, leading the school to honor him on June 15 with the Parsons Table Award at its Annual Parsons Benefit, via People. “I’m very excited to be receiving this honor… I’ve always tried to fuse fashion, technology, and the arts into everything I do,” Scott said of the accolade.

Scott’s personal life has seemed on the uptick as well. His relationship with Kylie Jenner, famously off-and-on since 2017, looks “on” again as of mid-2021. Kylie shared a sweet Instagram Story (via Entertainment Tonight) of her, Scott, and their daughter Stormi celebrating Memorial Day Weekend together, and Kylie and Stormi joined Scott at the Parsons Benefit. He and the makeup mogul looked quite “couple-y” again strolling the gala’s red carpet together, according to People, and they later posed with Scott’s arms around Kylie for an Instagram photo.

But the usually controversy-free rapper’s year hit a speed bump on the Fourth of July — keep reading to find out the fellow rapper with whom Scott reportedly feuded with at a celebration. 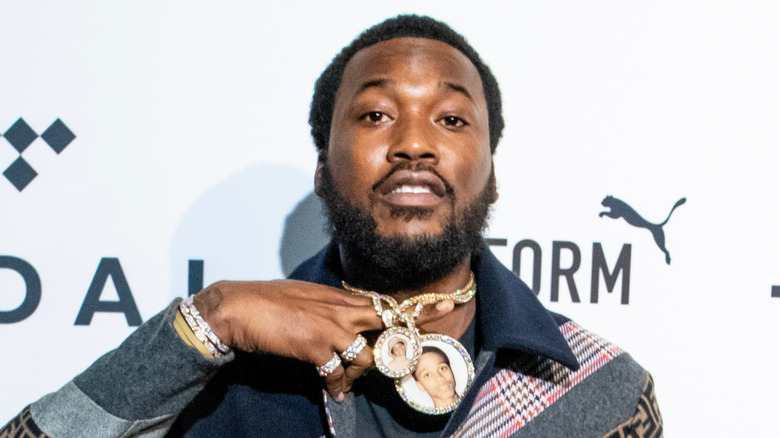 The Hamptons’ “White Parties” are known for their exclusivity, star power, and the occasional mid-festivities drama. According to Page Six, rappers Travis Scott and Meek Mill certainly brought the latter, having an argument so chaotic it reportedly ended Philadelphia 76ers co-owner Michael Rubin’s July 4th party for good. Sources told the outlet Scott and Mill’s verbal confrontation escalated to the point where the two had to be “pulled apart and led away from each other,” with Mill still reportedly heard yelling at Scott. Page Six’s insiders claim video exists of the fight, which reportedly happened around 1:30 a.m., but not much is known about what started it.

Mill had reportedly seemed in a fairly good mood earlier in the night, with the outlet reporting that he and Brooklyn Nets’ star James Harden engaged in a “tickle battle” that rapper Lil Uzi Vert’s girlfriend captured on video. In the video, posted to a Twitter user’s feed, Lil Uzi Vert put on a full breakdance performance for the lucky party guests, with Harden and Mill dissolving into happy laughter in the crowd and the former tickling Mill hard.

It’s hard to say if we will know more about what caused this particular beef, but as seen through his collaborations with Drake (via The Independent), Mill is one known to feud and forget.