Why Kaley Cuoco Is Completely Outraged Over A Horse

Kaley Cuoco has a soft spot for all things furry, so it’s no wonder her Hidden Hills home has become more like a farmhouse. The animal advocate’s non-human roomies include two rescue bunnies named Simon and Leni. The lucky rabbits have five-star accommodations, too: an air-conditioned habitat inside “The Big Bang Theory” star’s garage (per The Blast).

Cuoco’s bunnies love playing with some of the dogs that she and husband Karl Cook have rescued, including Ruby the hoppy terrier, and Blueberry the peppy pit bull. The couple also live with their “foster fail,” an elderly chihuahua named Dumpy. Then there’s Shirley the pit bull and Larry the mastiff. The latter joined the family shortly after Cuoco’s first pittie rescue, Norman, passed away.

Cuoco and Cook also have a stable full of animals that are too large to cohabitate with: their 25 show horses. Cuoco is a diehard horse girl who is so dedicated to the sport of showjumping that she kept on competing after a horse stepped on her leg and pretty much pulverized her bones during a 2010 riding lesson. Cook is also an accomplished equestrian. In fact, he and Cuoco met at a horse show in 2016. “We share so much love for animals — we love horses and we love the sport,” Cuoco told People in 2019. “It’s almost like he’s the horse whisperer. He is just wonderful with them.” And he might be just the guy she needs if she gets her hands on her next potential adoptee. 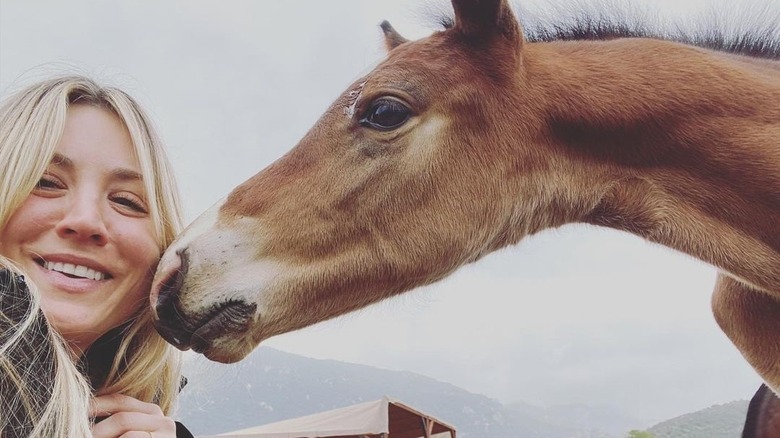 During the 2020 Olympic games in Tokyo, Kim Raisner, a coach on Germany’s modern pentathlon team, outraged fans by hitting a horse named Saint Boy. He was proving to be a handful for rider Annika Schleu, who could not get him to jump the fences during the equestrian showjumping event. Schleu was so frustrated that she was bawling her eyes out, and her coach’s unhelpful solution was to punch poor Saint Boy, per NBC News.

Now, Kaley Cuoco is hoping to give the frightened animal a new lease on life by giving him a stall in her barn. While taking Germany’s team to task in a series of posts on her Instagram Stories, she made an offer to purchase Saint Boy (via the Daily Mail). “I’ll buy that horse outright and show it the life it should have. Name your price,” one post read. Cuoco also expressed disgust over how he was mistreated. “This is a disgusting classless abusive representation of our sport in so many ways. This team should be ashamed of themselves,” Cuoco added. “Your team did not do your country proud or this sport. You make us look bad. Shame on you and Godspeed to any animal that comes into contact with you.”

Let’s hope that her offer isn’t refused so that Saint Boy can be spoiled rotten — he definitely deserves it after what he went through.