Why Sky has no limits!

Why Sky has no limits! At just 14, Sky Brown has the world at her feet. The Olympic skateboarder (and surfer, singer, author, dancer…) tells Nick Curtis that broken bones only make her stronger

I don’t live much of a normal life,’ says Sky Brown, which may be the biggest understatement in the world. At 14, this skateboarding prodigy isn’t just one of the sport’s biggest talents but a globetrotting teenage inspiration, too, with over two million followers on TikTok and 1.3 million on Instagram.

As Team GB’s youngest-ever summer competitor, Brown – who was skateboarding on her tummy before she could walk – won bronze at the 2020 Olympics, where the sport made its debut. She plans to both skate and surf at the 2024 event in Paris.

Add to her achievements winning Dancing With the Stars Juniors (a US spin-off of Strictly Come Dancing) aged ten, her 2020 pop single ‘Girl’, her book of wisdom last year, Sky’s the Limit, and things might start to sound precocious ‒ but during our Zoom chat she comes across as pretty down-to-earth. ‘Um, I just got in from the ocean, surfing, and I’m about to go to school,’ she says, explaining why her camera is off. ‘I didn’t get ready. I’m sorry.’ 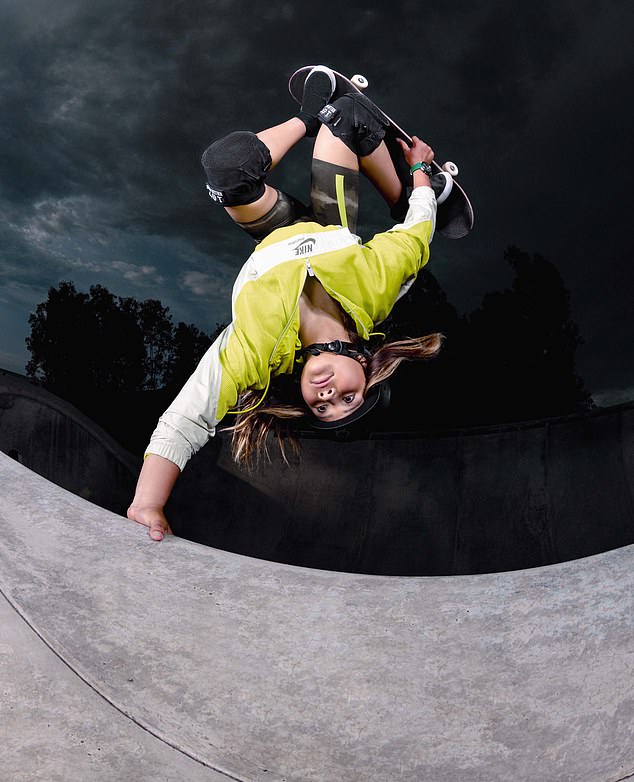 At 14 skateboarding prodigy Sky Brown is one of the sport’s biggest talents. As Team GB’s youngest-ever summer competitor she took home Bronze

Born in Miyazaki, Japan, to a Japanese mother, Mieko, a nutritionist, and an English father, Stuart, who works in marketing and is a keen amateur skater, Brown says: ‘I don’t recall the first time I skateboarded but I was little,’ she says. ‘I’d watch my dad skating with his friends and I’d steal his board and try to do tricks. He taught me some stuff even though he didn’t really want me to skate. It was “his” thing. Also I was a baby. It’s not all that safe. You can get hurt.’

Skateboarding, a late 1950s offshoot of surfing, has only latterly won recognition as a high-octane sport. Historically male-dominated, when Brown first started out in Japan ‘it was just me and some older boys’. After the family moved to California, aged ‘seven or eight’, she nagged her parents to let her do a competition organised by the skatewear brand Vans and found herself doing flips and kicks with the other girls.

‘I thought, this is sick [‘good’, in teen parlance]. This is where I need to be. It gave me a push. It’s crazy now: you’ll see girls skating in every [skate] park. It’s cool to see how it’s grown, especially for girls.’ Thanks to her small build, her technique as a skater and as a surfer has lightness and elegance. ‘It’s the best feeling doing a cool turn on the surfboard or a cool trick in mid-air,’ she says. ‘I feel complete, full of energy and fire.’

Her rise coincided with the huge reach of social media. Brown originally learned tricks from YouTube, though she also draws inspiration from other skaters including her brother Ocean, 11 (‘I love him but we’re very competitive’). She posts clips of her ‘runs’ on YouTube, TikTok and Instagram for her legions of young fans.

‘My parents are very strict about social media, though,’ she says. ‘I have, like, half an hour a day.’ If she’s been trolled, she hasn’t noticed: ‘I embrace positivity and ignore the negative.’

When the makers of Dancing With the Stars ‘found’ her videos, they realised she was a conduit to a young audience. ‘We were in Norway I think when we got asked and me and my mom watched [old episodes] all night,’ she says. ‘I was really excited as I love dancing in front of the mirror.’ She shelved competing in X Games, the annual competition for adrenaline sports, to do the show and won. ‘I got to dance and wear nice dresses and make-up – it was fun,’ she says. ‘I’m a girly girl – I love that stuff.’

In 2019 she qualified to represent Great Britain at the Olympics (Britain had a less pressured approach than Japan, apparently) and also came third in the World Skate Park World Championships. Then, while training with famous pro-skater Tony Hawk in 2020, she fell more than four metres from a ‘half-pipe’ ramp after mistiming a jump and fractured her skull and broke her wrist and hand. When she got to hospital she was unresponsive.

‘I don’t remember it but I know how I fell because [I’ve looked at] videos,’ she says coolly. She was doing a ‘backside alley oop’, where the skater shoots up the ramp and pivots on the lip, ‘but I realised I was at the gap already, I didn’t know what to do and I just shot off. I actually saved it pretty well by grabbing on to the wood thing [an adjoining structure] and I had a good helmet on. But it was definitely heavy: my dad was filming it and Ocean was skating [nearby]. It was especially hard for my mom: she doesn’t really watch me any more.’ 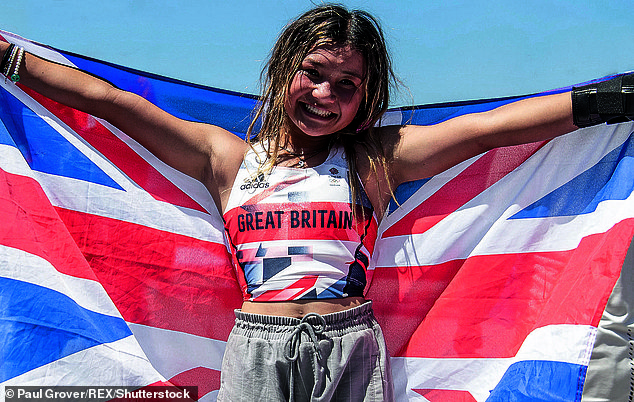 Sky won bronze for great britain at the delayed 2020 olympics. Opposite: seen mid-trick, in August

Undaunted, Brown used her mere four-week recovery period to record her single ‘Girl’, a paean to female self-empowerment: ‘I missed skating so much it was good to have a distraction. And I wanted to spread a message: that girls can do anything.’ She was then selected for the Olympics, which were delayed until 2021 by Covid. She won her bronze on the third of three runs, having fallen off her board in the first two.

‘It’s not the best feeling when there’s one day left and it’s your last chance to get it right,’ she says. But support – from the eventual winner, Sakura Yosozumi, her dad, who told her ‘no contest will define you’, and the crowd – powered her to a medal, which she thinks her mom keeps in a sock drawer. Although she says skating is more about fun than competition, she wants to be considered a great skater, not just ‘good for a girl’.

Back in California she surfs before school, and skates at a local park afterwards. She and her family, who speak Japanese at home, sit down for dinner together every night and, while she insists she does ‘normal teen things’ such as playing guitar, boxing and seeing her friends, hers is an extraordinary life.

Not only has she travelled widely, including to England last year to visit relatives and the famous skate park at London’s South Bank Centre, but she can reel off a list of the ‘really cool’ people she’s met – Gordon Ramsay, singer Drake and basketball star LeBron James – and she’s bankable, too: we’re talking today courtesy of luxury watch brand Tag Heuer, for which she is an ambassador.

As for the future, she’s almost blasé about the challenges of competing as both a surfer and a skater at the 2024 games and can’t imagine giving up either. ‘Tony Hawk is 54 and still doing amazing tricks,’ she says.

And if you want to see how amazing she is scan our link opposite, or google her and ‘mega ramp’ to watch a video of her doing a terrifying jump, under the supervision of Hawk, just weeks after her accident. Her nerves are clear as she initially hesitates; her exuberance after the trick is incandescent. ‘I’m a skater,’ she shrugs. ‘We fall but we’ve got to get back up. Keep skating.’