Why Trevor Noah Is Getting Roasted Over Andrew Cuomo

Trevor Noah is possibly (read: probably) regretting calling himself a “Cuomo-sexual” right about now. The “Daily Show” host did not reserve his affinity for New York Governor Andrew Cuomo for his initially well-received handling of the COVID-19 pandemic in 2020. Noah enthused about Cuomo — who resigned on August 10 after his impeachment investigation for sexually harassing 11 women — in an April 2020 show segment, saying, “People online are falling in love with him… Those people include me. My Tinder profile now lists me as Cuomo-sexual.”

Noah also got chummy with Cuomo while interviewing the disgraced public official in October that year, bantering about Cuomo’s status as a bachelor. Noah asked him then, “Have you taken the time to just at least… have a socially distant meal with anybody? … I know you were very busy, so I just wonder as a person if you’ve taken the time to do that for yourself.” Cuomo, perhaps in an unwitting foreshadow of his present, laughingly replied, “Trevor, on a human level, on a social level, nobody wants to have dinner with me.”

Noah also appeared on Ellen DeGeneres’ show in April 2020 to mutually gush over the governor, as DeGeneres had also adopted the “Cuomo-sexual” term, even asking Cuomo in another interview that month, “Can I say that I am a Cuomosexual? You know that that’s going around.”

Now, the chickens have come home to roost for celebrity Cuomo-sexuals. Here’s what you need to know about Noah’s backlash. 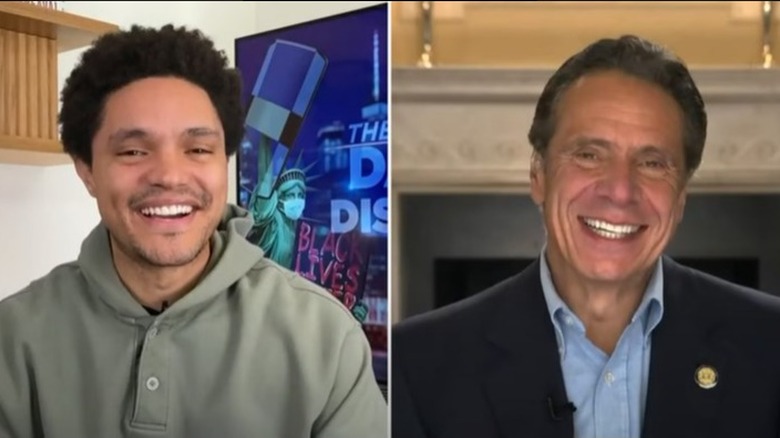 Andrew Cuomo’s impeachment scandal and subsequent August resignation is the consummate story of a public figure’s rise and fall — and as a comedian, Trevor Noah leaped to capitalize on the situation’s wordplay possibilities. In an August 10 tweet, Noah fired off the quip, “New York has successfully flattened the perv.” Unfortunately, his one-liner didn’t yield the lol’s Noah and his “The Daily Show” staff probably desired. “Sit this one out, buddy,” one follower responded, posting a screenshot of Noah’s now-seemingly infamous “Cuomo-sexual” show clip. “Oh I like how quickly you turned against your crush,” another tweeted.

In Noah’s defense, the comedian did do some self-effacing damage control on “The Daily Show” in March, after Cuomo received his first barrage of sexual harassment allegations. On March 2, “The Daily Show” account tweeted, “People are questioning The Daily Show’s earlier coverage of Andrew Cuomo. We checked our archives and couldn’t find any problems.” The tweet’s accompanying show clip featured a sarcastic  Noah musing, “I’ll tell you, man, all those people who praised Cuomo so highly last year, whew — those people really don’t look so smart now” and mock-turning to someone off-camera, yelling, “Delete the f***ing tapes!”

Given that Noah is only one of the many self-declared celebrity “Cuomo-sexuals,” we wonder if any other members of the likely-disbanded club will walk back their comments.