Witney Carson Shares Pics & Gets Candid About Her Post-Pregnancy Body

Witney Carson is learning to love her post-baby body.

In an Instagram post on Friday, the Dancing With the Stars pro got candid about being self conscious and struggling with not feeling “good enough” about her weight and appearance. Carson, 27, gave birth to her first child, son Leo, just over two months ago, and shared photos of herself in a sports bra and leggings.

“Progress not perfection ✨ being a dancer growing up & even throughout adulthood (especially throughout adulthood) I’ve always been self conscience about my weight and how I looked,” she wrote. “I’ve struggled with this & that’s why I was hesitant to post these photos-I didn’t feel I looked a certain way, ‘good enough’ & that was a sad thought to me.”

She added that she’s “learning to celebrate my body the way it is now and celebrate the small successes to a HEALTHY body, spirit, and mind🙏🏼”

Carson received a number of supportive messages from her followers, friends and DWTS colleagues, including best friend Lindsay Arnold.

“You are stunning wit❤️❤️ and the best mama to little Leo he is so lucky to have you ❤️,” she wrote, while Sasha Farber commented, “U look great!!”

The new mom later thanked everyone for their loving messages. “You guys are seriously making me cry. I have the best support,” she wrote alongside a screen grab video of her comments. 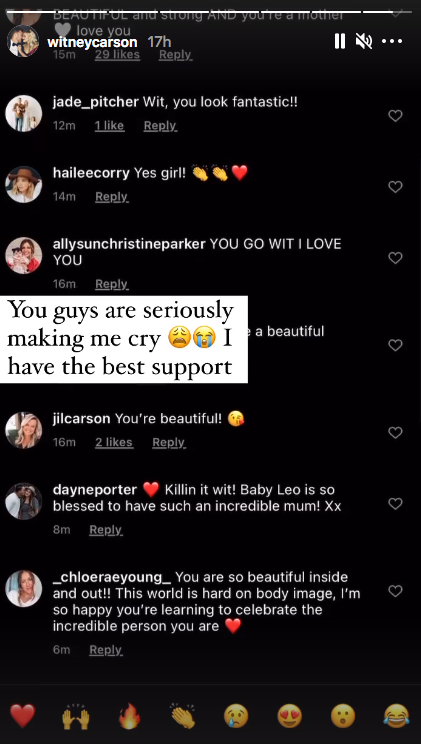 Carson announced on Jan. 4 that she and husband Carson McAllister had welcomed baby Leo the day prior. In an interview with ET back in July, just days after announcing they were expecting, the two couldn’t contain their excitement over the happy baby news.

“It’s absolutely insane. It came as a shock because we were not expecting it; we both kind of looked at each other and were very surprised,” Carson said. “So, it’s kind of taken some time to digest this news, but ultimately, we are just so excited. And it’s just kind of crazy to be growing a human inside me. Like, it’s bizarre! I don’t even think it’s hit him yet at all.”

ET also spoke with Carson and Arnold in November about what it was like being pregnant together and having to take a season off from DWTS.

“We’ve done so many things in our lives together, so it’s like, naturally, why wouldn’t we get pregnant together? It’s so funny because you can’t really plan a pregnancy,” Arnold said. “I mean, you can plan when you want to try, but it’s not like it’s always going to happen when you want it to.”

See more in the video below.