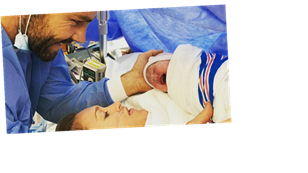 Ben Foden's wife Jackie Belanoff Smith has announced that they have welcomed a baby girl, and revealed her sweet name.

The blonde beauty took to her Instagram feed to share a series of intimate pictures of their newborn daughter, who they've named Farrah Abra Foden.

The new mum posted an incredible snap of herself cradling little Farrah right after she was born as Ben, 33, could be seen standing over her smiling down at their baby.

She then revealed the details behind her labour as she told her 7,927 followers: "So with an original due date of June 12, a few weeks ago I developed cholestatis, which is an elevation in liver enzymes or something. [sic]

"I was getting super itchy and blood work showed concerning levels, and it was decided I needed to induce at 37 weeks which is technically considered term." [sic]

Jackie then explained that she was in labour for an entire day and wasn't dilating, which meant she had have a Caesarean section.

"After 24 hours of labor, I wasn't dilating, and she needed to be sectioned, so mom and Mark (my stepdad) scrubbed up and had her out in 30 mins. [sic]

"(Ben cut the cord which turned out to be super short, which is probably why she wasn't coming down naturally and helping me dilate)." [sic]

She also told followers that her little girl is "doing incredible" and she is "so in love with this little blessing".