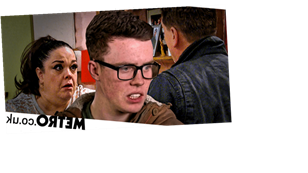 Vinny Ashdale (Bradley Johnson) was chuffed to find a pal in newcomer Alex in Emmerdale, but the young lad has no idea that his so-called mate is actually dad Paul Ashdale (Reece Dinsdale) — that is, until next week, as he makes such a devastating discovery in the coming episodes.

Vinny takes ‘Alex’ up the Dingle household for the afternoon, and the pair have a chat. However, Alex ends up putting his foot right in it, as he makes a comment about Mandy (Lisa Riley) — one that would suggest that he already knows her.

Vinny’s quizzes his mate further — who does what he can to cover.

As they leave, Mandy spots them — and it’s safe to say she’s not in there least bit pleased.

Later, she uses Vinny’s phone to set up a meeting with Paul, and — upon arriving — he’s shocked to realise that she knows everything.

Emotions run high, and Mandy orders Paul to stay away, and — later — he barges up to the Dingles once more to have it out with her once again.

However, Vinny soon walks in, and — in spite of Mandy’s attempts to cover — Paul reveals the truth.

Having realised the extent of all the lies, Vinny storms off, and Mandy swoops into action with the Dingles by her side, as they set off in search of the young lad.

However, it appears as if they’re unable to find him, and Mandy begins to fear that she’s lost him for good.

Has Vinny left the village?

Or will he return?